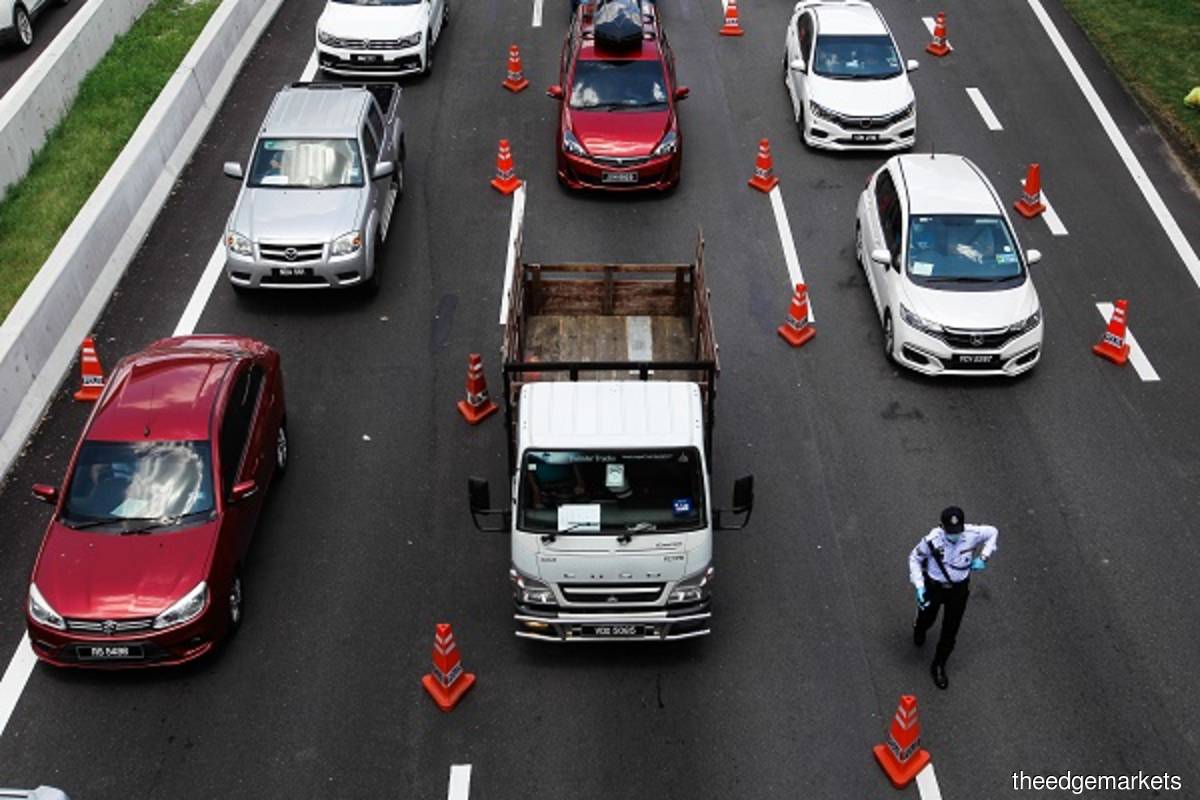 Police set up roadblocks at the Sg.BesI Toll Plaza exit for all vehicles entering Kuala Lumpur by checking their cross-state permission letters on Monday May 10, 2021. (Photo by Zahid Izzani/The Edge)

KUALA LUMPUR (May 10): As Aidilfitri draws near, there still are some individuals who are stubborn and willing to break the law to cross state borders, although the interstate travel ban comes into effect today.

In KELANTAN, after over 1,000 vehicles that tried to enter the state were ordered to turn back yesterday, another 366 vehicles were ordered to do the same from 12am till 7am today for not having police permits.

"Currently, roadblocks are conducted at three entry points into Kelantan - Jeli, Gua Musang and Pasir Puteh – and 1,426 vehicles have been ordered to turn back,” Kelantan Police chief Datuk Shafien Mamat said when contacted by Bernama today.

He said they would tighten roadblocks at the three border points to ensure only those with valid approvals were allowed in, adding that they would also monitor other routes to thwart unauthorised attempts to enter the state.

"As the public is not allowed to cross states and districts, I advise them not to do so as this is courting trouble… if they break the law, they will be issued compounds,” he said.

He also reminded the people in the state not to use other routes to get into other districts or states as the police will be monitoring road users.

In SELANGOR, police said the are still monitoring traffic movements in three districts under the Conditional Movement Control Order (CMCO).

Kuala Selangor District Police chief Supt Ramli Kasa said they had set up five roadblocks in Kuala Selangor and two targeted roadblocks, which is done by monitoring the public’s movements.

“If there is a lot of movement, then we will set up a roadblock in that area, (but) what’s certain is that there will be roadblocks at the exit points of the highways,” he said.

Six districts in Selangor, namely Hulu Langat, Petaling, Gombak, Klang, Kuala Langat and Sepang, have been placed under the Movement Control Order (MCO) from May 6-17.

Kuala Selangor, Sabak Bernam and Hulu Selangor, however, are still under the CMCO.

In PAHANG, 32 roadblocks at district and state borders have been set up involving more than 150 police personnel, with assistance from other security teams.

“For the Kuantan district, which is under the MCO today, there are six roadblocks. In addition, we are conducting snap checks at certain routes using mobile patrol vehicles,” he said.

In TERENGGANU, 25 roadblocks have been set up, following the travel ban which begins today until June 6.

Terengganu Police chief Datuk Roslee Chik said 12 roadblocks were at state borders and will operate around the clock, while others will operate between eight to 16 hours, depending on the current situation at each location.

“A total 108 police and 108 armed forces personnel will be on duty in shifts at all roadblocks beginning from 8 am today,” he said.

In KEDAH, 481 police officers and personnel are manning 24 roadblocks at the district and state borders.

In SABAH, State Police commissioner Datuk Hazani Ghazali said 51 roadblocks had been set up to control entry into districts following the ban beginning today till May 16 in accordance with state government’s orders.

"The roadblocks will control interdistrict movements, including in residential areas, cemeteries, shopping malls and other areas of interests throughout Hari Raya… Kota Kinabalu, Putatan and Penampang are considered one district.

"A total of 355 Covid-19 monitoring teams with 2,103 personnel are on duty to ensure that the public complies with the set standard operating procedure (SOP),” he said.

He added that police were still receiving a lot of applications for interdistrict and interstate travel for Hari Raya from the public, with many citing giving Raya money to family members as an excuse.

“Applications will be rejected due to invalid reasons… for those who violate the SOP, they will still be issued compounds if they continue to violate orders,” he said.

The Sabah government had previously allowed interdistrict travel according to six set zones.