Police have no power to declare Bersih 4 illegal, says PKR 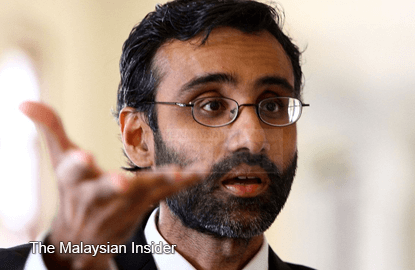 (Aug 21): The law does not allow the authorities to declare the upcoming Bersih 4 rally as illegal or to ban it, PKR said today, disputing the Kuala Lumpur police chief and the deputy home minister.

Lawyer N. Surendran of the party's political bureau said that by deeming the gathering illegal, the police were in breach of the Peaceful Assembly Act (PAA).

He said rally organiser Bersih 2.0 had gone beyond the requirement of the law by submitting a notice of the gathering to the police, although there was no need to do so.

The Padang Serai MP cited the Court of Appeal's decision last year in the case involving PKR youth chief Nik Nazmi Nik Ahmad, that it was not mandatory for a rally organiser to give a 10-day notice under Section 9(1) of the PAA.

"To put it another way, there is no offence committed even if no notice is submitted to police prior to the rally.

"The claim by the police that the rally is illegal because the organisers have not obtained permission of the owners of the premises is absurd and without any legal basis," Surendran said in a statement.

He added that the police were only empowered to disperse an assembly in circumstances such as if it becomes disorderly or held near a prohibited place.

He said while PAA's section 11 encouraged organisers to get the consent of the owners, there was no offence committed if permission was not obtained.

"In any event, the Bersih 4.0 organisers have said that they will only be gathering in the vicinity of Dataran Merdeka, hence there is no need for any consent.

"It is disturbing that the various statements coming from the police and home ministry appear to be in disregard of the provisions of the PAA 2012 itself," said Surendran.

He urged the authorities to uphold the law instead of issuing statements that were contradictory to it.

"The police and Home Ministry must immediately retract their declaration that the Bersih 4.0 gathering is illegal, and do everything in their power to facilitate this important and popular public assembly," he said.

He said the police were only notified of the rally on Tuesday, and the documents handed in were missing a permission form from the owner of the rally's venue.