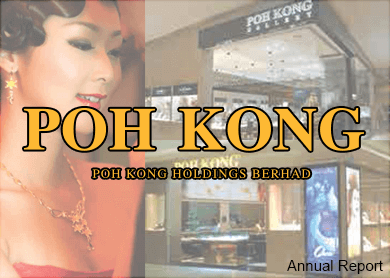 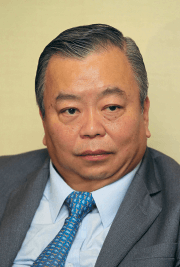 AS most retailers brace for slower sales ahead due to higher prices post-Goods and Services Tax (GST) implementation, jeweller Poh Kong Holdings Bhd says it is absorbing the 6% consumption tax to retain customers.

“Our customers will not be affected because we will absorb GST,” Poh Kong executive chairman and group managing director Datuk Choon Yee Seiong tells The Edge in an email.

He says demand for jewellery items for weddings, birthdays and festive seasons for all communities will continue with or without GST.

“The personal income tax [rate] has been reduced since the beginning of this year, thus raising the disposal income of consumers,” Choon says, adding that demand for gold has also been rising gradually as an alternative investment to holding the ringgit.

“The outlook for the jewellery industry will remain resilient. We should be able to maintain our profits and perhaps perform better than the last financial year,” he says.

According to the Malaysia Gold Association (MGA), investment precious metals (IPMs) — bullion gold, silver and platinum — are exempted from GST. However, only 10% of gold trading in Malaysia is in IPM form while the remaining 90% is in jewellery, which is subject to GST.

MGA pro-tem secretary-general Datuk Louis Ng Chun Hau was recently quoted by the media as saying that the association predicted a 30% drop in demand for gold and silver after the implementation of GST. This situation could go on for a year before people start buying jewellery again, especially gold ornaments, he said, raising concerns over the performance of gold jewellers going forward.

Many jewellers, however, had experienced a pre-GST “gold rush” in March, which will boost their first-quarter earnings.

According to Choon, Poh Kong (fundamental 0.95; valuation: 1.4) had experienced a “satisfactory week-long pre-GST sales” in end-March.

“Based on our prudent growth forecast and taking the retail spending and market sentiment into consideration, [our] revenue and profit are expected to grow in tandem with GDP [growth] for the next two years, with the assumption that there is no drastic fluctuation in gold prices and currencies and extraordinary events like a ‘gold rush’,” says Choon.

“In the coming years, our growth will primarily come from local expansion as well as new product lines and wider range of investment products at affordable prices.”

He adds that Poh Kong will not get into a price war to attract customers.

In FY2013, there was a spike in demand for gold investment products such as bars, wafers and jewellery when gold prices fell 20% over a period of three months from April 2013.

Since FY2014, Poh Kong has been actively consolidating and streamlining its business. Its efforts have since borne fruit — for 1HFY2015 ended Jan 31, 2015, its net profit almost doubled to RM10.79 million on lower operating expenses. Revenue, however, rose only 1% to RM410.4 million.

On April 17, Poh Kong’s share price hit a three-year high of 58 sen and its trading volume surged to 8.6 million shares, its highest since February 2012. The stock closed at 51 sen last Wednesday, giving the company a market capitalisation of RM209 million.

Analysts believe that the surge in share price was due to Poh Kong’s undervaluation and stable gold prices, which stayed at around US$1,200 per ounce in the last one month.

“It’s probably due to their undervaluation. They are the largest gold retailer in Malaysia and have a strong competitive advantage in terms of brand, location and track record. Gold prices have also stabilised, so their net profit margins should improve this year,” says an analyst, who declined to be named.

“We are not aware of any investor buying in currently,” says Choon, when asked about Poh Kong’s recent share price rally. 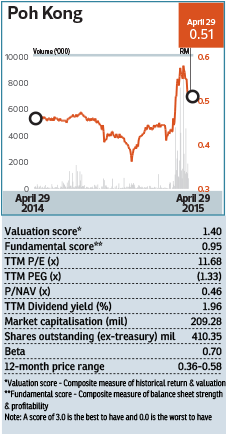 According to Net Research Asia, Poh Kong’s valuations are undemanding considering its strong asset backing, as its share price is way below its book value of RM1.11 per share.

Choon says Poh Kong is currently looking to broaden its stable of jewellery brands by continuously launching exclusive lines of designs as well as introducing a wide range of designs under its Anggun, Tranz, Happy Love, Disney and Art of Auspicious Jewellery brands. It will also have a wider range of investment products.

“We will take a cautious approach in our expansion plans. We foresee stiffer competition due to lower cost of labour in some Asean countries compared with Malaysia.

“When time permits and when the company deems fit, we may take advantage of the Asean Economic Community to venture into these countries,” Choon says, adding that Poh Kong has the advantage of having its own manufacturing plant and refinery system, which will keep its cost of production down.