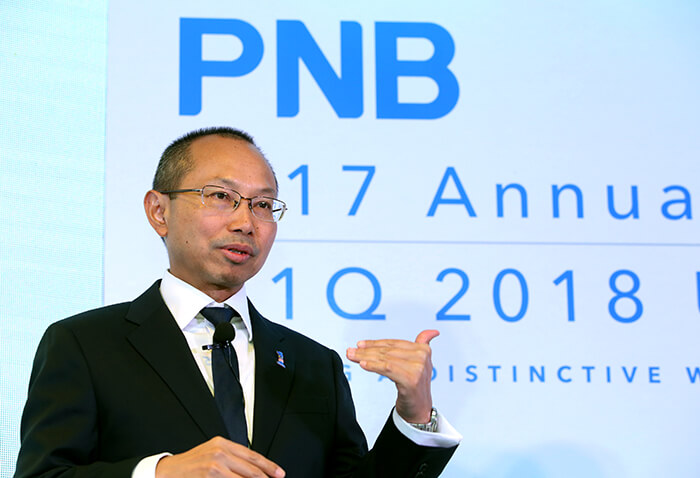 Wahid: By leveraging on this and building on our solid fundamentals, we are pleased that PNB and our unit trust funds have been able to deliver better performance for our unitholders. Photo by Sam Fong

At the same time, PNB also declared an income distribution for all three funds under the Amanah Saham Gemilang (ASG) umbrella fund, namely ASG-Pendidikan, ASG-Kesihatan and ASG-Persaraan of 4.80 sen per unit, 5.20 sen per unit and 5.15 sen per unit respectively, for the same financial period.

Its group chairman Tan Sri Abdul Wahid Omar said the performance of ASB2, ASM and ASG has benefited from the Malaysian economy, which registered a steady growth of 5.9% last year, and the FBM KLCI, which rose by 9.4% following three years of negative price returns.

"By leveraging on this and building on our solid fundamentals, we are pleased that PNB and our unit trust funds have been able to deliver better performance for our unitholders," he said at the income distribution announcement and launch of its inaugural public annual report 2017 ceremony today.

Meanwhile, the income distribution for ASM involves a total payout of RM1.1 billion, which will benefit over 540,000 unitholders with 18.4 billion units. ASM recorded a net income of RM1.1 billion as at Feb 28, 2018.

PNB said the distribution declared by ASB2 and ASM would be reinvested as additional units into the accounts of unitholders and credited into unitholders' accounts on April 1 this year.

"This stronger performance is in line with the funds' focus to give balanced returns through investments in equities and fixed income," he added.

On ASG, PNB said the total income distribution of RM211.6 million for all three funds will benefit 185,590 unitholders, and it is payable on April 1.

"It is also in line with PNB's strategy of focusing its variable price funds towards delivering total return," he said.

Additionally, PNB has distributed dividend and bonus amounting to RM14.6 billion for FY17, bringing the cumulative dividends paid out since its inception in 1981 to RM172.1 billion.

Going forward, PNB is positive on the year ahead as it expects a synchronised growth across major economies in 2018 with the IMF expecting global gross domestic product to expand by 3.9%.

"We hope that 2018 will be a good year for the local economy and capital markets that will benefit more than 13 million unitholders," he said.