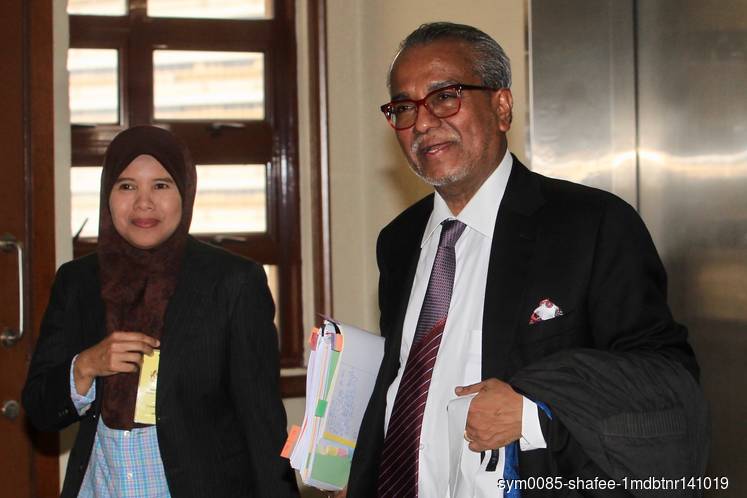 KUALA LUMPUR (Oct 17): 1Malaysia Development Bhd's (1MDB) Article 117 in its memorandum and articles of association (M&A), which requires written approval from the Prime Minister before the fund can decide on a wide range of matters, was not the first provision in a government-linked company to be structured that way, according to lead defence counsel Tan Sri Muhammad Shafee Abdullah.

Shafee cited the example of Petroliam Nasional Bhd's (Petronas) M&A, which he claimed was also very controversial as it granted the PM even more powers over the company than 1MDB’s did.

According to Article 109 of Petronas' M&A, the "chairman of the board shall be appointed by the Prime Minister and shall at all times hold proxy with respect to all shares held by the government and such proxy shall be exercised [at the direction] of the Prime Minister.

"This is such an overwhelming power, as the Prime Minister can virtually overrule the entire board," he added.

In fact, he further went on to show that even Ministers are granted similar "far-reaching powers" over companies under their portfolio.

For instance, Shafee cited Section 10 of the Bank Simpanan Nasional Act 1974, which allows the Finance Minister to give general directions to the board regarding policies to be pursued by the bank.

Besides that, Section 12 of the Bank Pertanian Malaysia Bhd Act 2008 enables the Minister of Agriculture and Agro-Based Industry to give directions to the board in respect of agriculture policies to be pursued by the bank, which the board shall comply with.

Shafee added that under the Tabung Haji Act 1995, the Minister in charge may appoint the chairman and chief executive officer of his choice.

As such, Shafee argued that Shahrol had wrongly interpreted Article 117 by giving the former Prime Minister free rein on how to manage 1MDB, describing Najib as the "emperor of 1MDB”.

Shafee explained that under Article 117, although certain events may not take place without the written approval of the Prime Minister, the decision still lies with the board of directors.

Shafee: I’m putting it to you, this provision is almost like veto power, for the PM to veto any necessary decision by the company [instead of coming up with his own decision].

Shahrol: That is fine in black and white but in practice, it doesn’t happen that way.

Shafee: I’m putting it to you, it is still a wrong interpretation. You have just made the PM the emperor of 1MDB. Like the good old days in India. There was no check and balance.

Shafee: So he was [indeed] the emperor of 1MDB.

Under Article 117 in 1MDB's M&A, certain decisions such as any change to the M&A, hiring and firing of senior management and directors, and any financial commitment by the State-owned fund, may not be made without prior written approval by the Prime Minister.

Shahrol had previously claimed that former Prime Minister Datuk Seri Najib Razak invoked Article 117 in order to proceed with the issuance of the RM5 billion Islamic Medium Term Notes (IMTN) by Terengganu Investment Authority (TIA), the precursor to 1MDB, in 2009.

In excusing his responsibilities as the CEO for certain decisions taken by 1MDB, Shahrol had repeatedly cited Article 117 throughout the cross-examination since last week, as the reason why he followed instructions from Jho Low, which he believed were relayed from Najib.

On Sept 2, 2009, MoF Inc, as the ultimate shareholder, moved a resolution to include Article 117 in TIA’s Articles of Association.

Under Article 117, Najib alone — as Prime Minister and Finance Minister — was given the final say in all of the company’s investment decisions.

Najib has claimed trial to 25 charges of abuse of power and money laundering in relation to billions of ringgit allegedly sourced from 1MDB.