PM: Proclamation of emergency is not military coup, civilian govt still in place 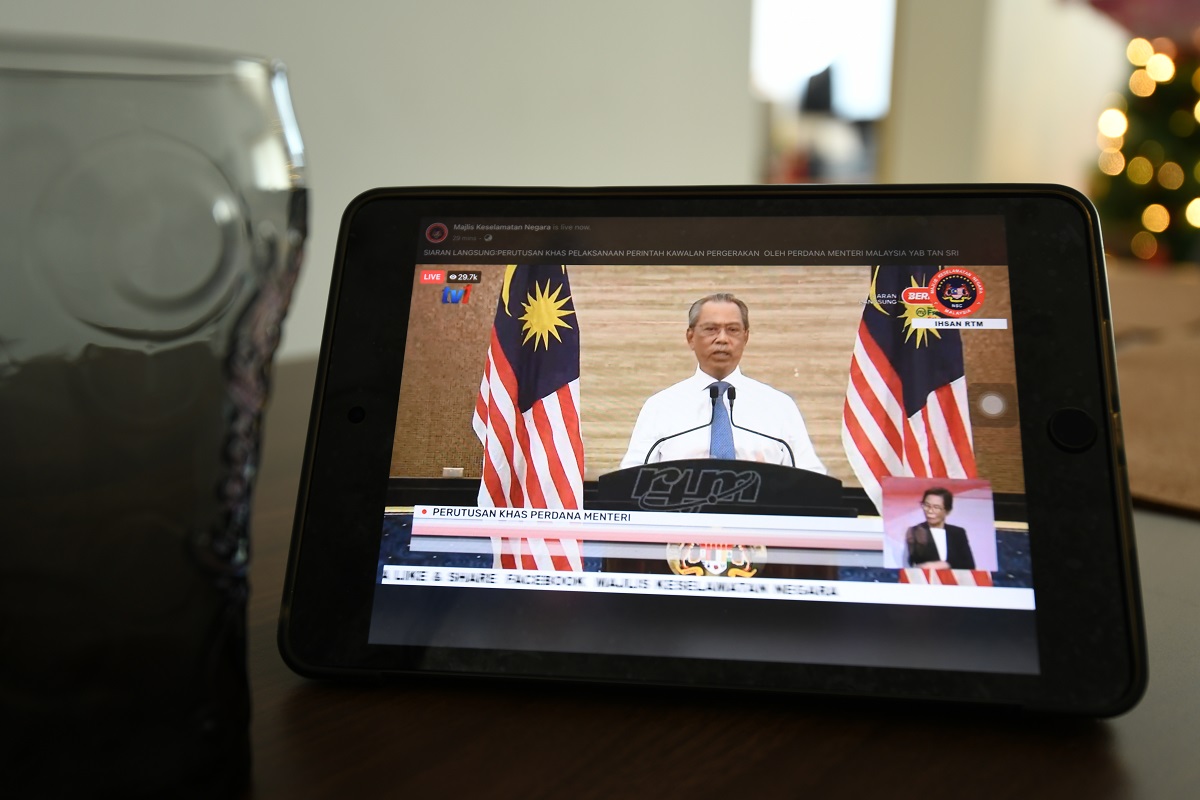 Muhyiddin assured that there will be no curfew imposed under the emergency. (Photo by Sam Fong/The Edge)

KUALA LUMPUR (Jan 12): The proclamation of state of emergency by the King earlier this morning does not entail a military coup and the civilian government will continue to function, according to Prime Minister Tan Sri Muhyiddin Yassin.

In a nationally televised address this morning, Muhyiddin assured that there will be no curfew imposed under the emergency. He said the state of emergency is declared in order to empower the King to promulgate ordinances that may facilitate government affairs and overcome any regulations that make it difficult to deliver fast, efficient and effective public health services during the Covid-19 pandemic.

"In terms of government administration, the Cabinet and the State Executive Council will continue to function in accordance with the Federal Constitution and any ordinance promulgated by His Majesty the Yang di-Pertuan Agong from time to time.

"I assure you that the administrative and public service machinery of the federal and state governments will not be disturbed by this declaration of emergency," Muhyiddin said.

Earlier this morning, the Yang di-Pertuan Agong Al-Sultan Abdullah Ri’ayatuddin Al-Mustafa Billah Shah consented to declaring a state of emergency until Aug 1, 2021 to control the spread of Covid-19.

In a statement, Istana Negara's Comptroller of the Royal Household Datuk Indera Ahmad Fadil Shamsuddin said the King granted an audience to Muhyiddin yesterday, where the premier shared that the Cabinet had agreed that a state of emergency be declared as a proactive measure to curb and flatten the curve of daily new Covid-19 cases that had continuously reached four digits since December.

In today's speech, Muhyiddin explained that under the emergency:

PM commits to holding elections once Covid-19 under control

The prime minister, in his speech, also acknowledged that there have been parties strongly urging for general elections to be held, considering the current political instability. On this, he said the main reason he did not dissolve the parliament is due to the Covid-19 pandemic.

"The decision not to hold elections during the Covid-19 pandemic is in line with one of the five principles of Maqasid Syariah (Objectives of Syariah) which is the protection of life. In this context, it is my duty as Head of Government to take care of the lives of the people by protecting you from Covid-19 infection," he said.

Correspondingly, Muhyiddin stated his commitment that a general election will be held as soon as the Independent Special Committee to be established certifies that the Covid-19 epidemic is under control or has fully recovered and elections are safe to hold.

"At that time, it is up to the people to choose which government is qualified to govern this country and to take care of the welfare of the people. This is my commitment and a commitment that I will fulfil, God-willing.

"For me, in a situation where the country and the people are facing great harm, it is very important that all politicians set aside their differences and stand in solidarity with the people. When the time comes for politics, then be politically responsible," he called on the politicians.