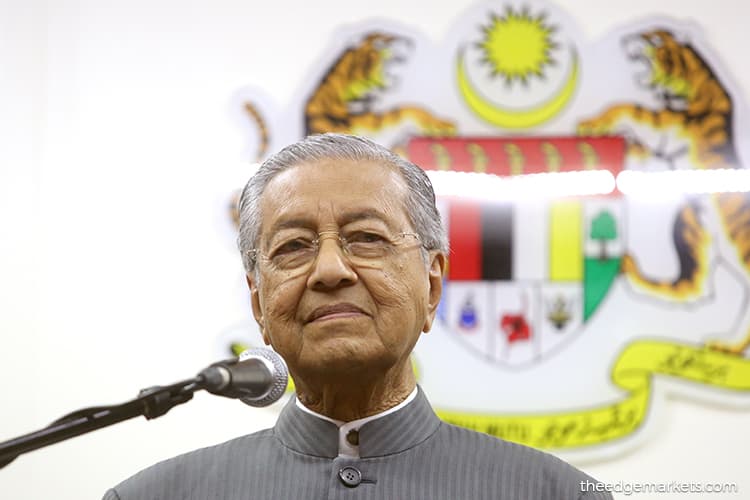 PUTRAJAYA (Aug 1): Prime Minister Tun Dr Mahathir Mohamad said today he will step down when he finds that the situation in the country has been put on an even keel and can carry on from there.

"It may be two years, it may be three years, I don't know, but we are working on that," he said when asked about the call by PKR deputy president Datuk Seri Mohamed Azmin Ali that he should serve as the prime minister for the full term of five years.

Speaking in a press conference after attending a round-table dialogue with international business chambers on workforce here, Dr Mahathir said he would keep his promise to step down when he was asked if he would consider the call for him to serve the full term.

"Unless they push me to a corner and put a gun to my head and say ‘you continue until you finish your term’, unless you do that, I will step down. I'll keep my promise," he said.

Asked about media reports that several leaders from the opposition UMNO, PAS and Gabungan Parti Sarawak (GPS) parties had met him on Tuesday, Dr Mahathir, who is the ruling Pakatan Harapan (PH) chairman, confirmed that such a meeting had taken place.

"They wanted to come and see me. I saw them. I heard what they wanted to say. Well, a lot of them expressed support for me, thank you very much," he said.

Dr Mahathir said the support for him to stay on as the prime minister for the full term is not new as PAS president Datuk Seri Abdul Hadi Awang has been saying that all the time.

Mohamed Azmin on Monday reportedly said he welcomed the stand by the PAS-UMNO alliance to back  Dr Mahathir to remain as the prime minister until the end of the current five-year term of the government.