PM: Bilateral ties with Saudis kept me from Sabah 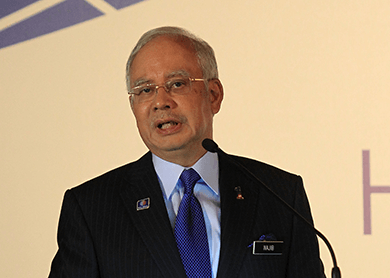 KOTA KINABALU: Prime Minister Datuk Seri Najib Razak said he had little choice but to keep to his scheduled visit to Saudi Arabia while Sabah dealt with the aftermath of an earthquake because Malaysia’s bilateral ties with the kingdom were important.

Najib told a crowd during his visit to Kundasang in Sabah yesterday, near where last Friday’s quake struck, that he had really wanted to go to the state earlier.

“I had intended to come earlier after hearing news about the earthquake. But that day was the birthday of the Yang Di-Pertuan Agong and then I had to leave for an official visit to Saudi Arabia as the king and the crown prince were involved.

“Because our bilateral ties are very important, I could not come to Sabah, specifically to Ranau, earlier,” he said in a speech at a ceremony yesterday where aid was given to families of guides working on Mount Kinabalu.

Saturday was the Yang Di-Pertuan Agong’s birthday celebration, and Najib left for Saudi Arabia on the same day. — The Malaysian Insider