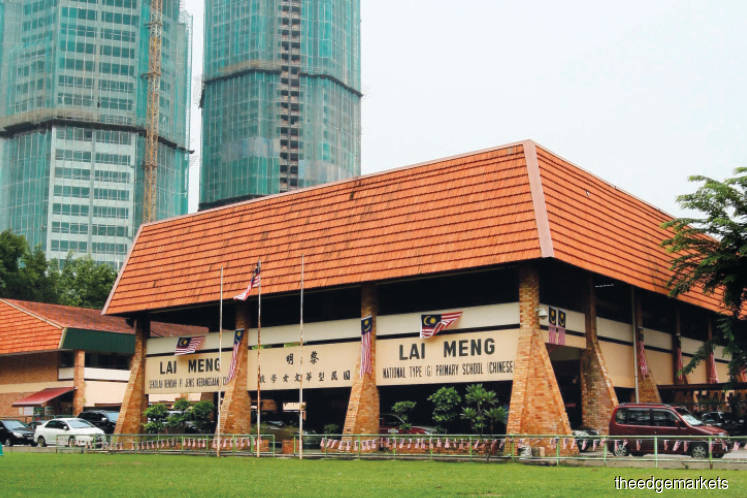 File picture of the former Lai Meng School ... the site is one of the last prime parcels in KL. Photo by Suhaimi Yusuf/The Edge

THE cap on plot ratios in Kuala Lumpur to a maximum of 1:10, as gazetted under the Kuala Lumpur City Plan 2020 (KLCP2020), could lead to the downsizing of several high-end, high-rise developments, especially in the city centre.

Observers say if the new cap is applied across the board, without any exceptions, projects that will shrink include UEM Sunrise Bhd’s development of its Angkasaraya land, Magna Prima Bhd’s redevelopment of the Lai Meng School land in Jalan Ampang and Tradewinds Corp Bhd’s Tradewinds Square in Jalan Sultan Ismail.

These projects are located in a prime area of Kuala Lumpur where land is scarce and of high value. To recoup their investment, landowners need a high plot ratio to increase the number of units they can sell.

“It all depends on how much they paid for their land and how much they can sell each unit for. Even if the plot ratio is comparatively low, new developments can still make money with the right product and pricing,” says a property agent who specialises in high-end projects.

The KLCP2020, which was gazetted by the Ministry of Federal Territories on Oct 30 last year, includes controls on property development density in the capital city with the highest plot ratio fixed at 1:10, including for projects in the Golden Triangle.

The KLCP2020 highlights a number of property developments that have been given higher plot ratios than planned. For example, a development on two plots of land in Jalan Imbi received a plot ratio of 1:20, even though it was supposed to be only 1:7.

In response to The Edge’s questions as to its plan for its Angkasaraya land, UEM Sunrise says the plot ratio approved for it was 1:12 but that has since lapsed as the developer is not ready to proceed with the project.

The group says the Angkasaraya land will now have a plot ratio of 1:10 in accordance with KLCP2020. A spokesperson says the group could not say what the targeted plot ratio was when the land was acquired by Sunrise Bhd in 2008 as the current team was not involved in the deal.

“As the deal was signed back in 2008, we are unable to advise what the targeted plot ratio was at that juncture or to justify the selling price,” the spokesperson tells The Edge.

Sunrise took control of the Angkasaraya land when it acquired Tanah Tuah Development Sdn Bhd from Reliance Pillar Sdn Bhd and Lembaran Segimaju Sdn Bhd for RM57.4 million in May 2008. At the time of the acquisition, Tanah Tuah was in the process of purchasing the 1.6-acre parcel for RM152 million.

Together with Sunrise’s RM27 million cash payment to the vendors of Tanah Tuah as part of the RM57.4 million deal, the acquisition cost of Tanah Tuah — and by extension the land — works out to RM179 million as Tanah Tuah had taken 100% funding for the land. Wisma Angkasa Raya, a 24-storey commercial building with a net lettable area (NLA) of 167,728 sq ft, was located on the site.

As land cost typically accounts for 10% of gross development value, any real estate built on the land will have to be sold at a minimum price of RM3,200 psf for the developer to see good margins.

It is uncertain if UEM Sunrise’s product can fetch RM3,200 psf, although it must be noted that the land offers uninterrupted views of the Petronas Twin Towers.

Residential unit prices in the KLCC area have breached the RM3,000 psf threshold in recent years. Le Nouvel in Jalan Ampang by Wing Tai Asia Holdings Ltd was launched in 2015 at a minimum price of RM3,059 psf.

Magna Prima did not respond to questions emailed by The Edge while a spokesperson for Tradewinds said the group is reviewing its business direction and would be able to reveal more in “due course”.