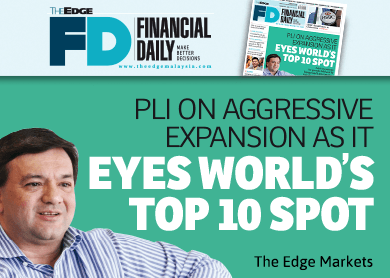 “We are taking bets on a lot of places. We are investing in facilities in China. We [also] have land in India, which by the end of the year we will start construction on,” said PLI group managing director and chief executive officer Amir Hamzah Azizan in an interview last week with The Edge Financial Daily.

PLI bought a small blending facility in Shandong province’s Weifang prefecture, to have a footprint in China five years ago. After immediately revamping the facility, it produced 65 million litres of lubricants a year.

“Last year, the board gave approval to expand the Weifang plant. So, we are now undergoing expansion, which will give us a plant facility [capable of producing] about 170 million litres per year,” said Amir.

“We have also gotten [the] board’s permission [for expansion in India], because we are equally optimistic that India will be good in the long term. We are at the stage of going through the tendering [to construct a new plant there]. By the end of the year, hopefully, we will ask the board for the funds to build the plant,” said Amir.

In 2013, PLI signed a land-lease agreement with Maharashtra Industrial Development Corp, the industrial infrastructure development agency of the government of the state of Maharashtra in India, to build a lubricant oil blending plant on a 25-acre (10.12ha) piece of industrial land.

“Last year, we did about 24 million litres, so India is at a smaller stage of growth. It will take 33 months to build the plant in India because it’s greenfield and by the time it comes up it should be [producing] in the region of 35 million litres or so. It will help us accelerate our pace in India,” he said.

He said that PLI has also received the board’s support to put up a plant in Argentina as well as open offices in Colombia, Chile and Peru, as the group becomes “more aggressive in Latin America”.

He also shared that the current slump in oil prices has not hurt the company.

“It has actually lightened the load for working capital. For a very simple reason — our working capital comes from the feedstock from refineries. If crude oil drops, the cost for refineries to produce drops so base oil price drops but margins stay the same. The key worry is if this drop leads to demand disruption. At this moment, we don’t see demand disruption in the overall economy. In fact, there have been pickups,” he said.

To PLI, which is among the top 15 global lubricant firms in the world now, there are a lot of pockets of growth that are of interest, said Amir.

Asia, however, comes first in its priorities for the market growth the region promises, followed by Europe for its yield and Latin America for its future potential.

Ambitions aside, Amir said PLI is still relatively small in the global space, even though it has been growing at a significant rate.

“We probably have a global market share of 5% or 6%, but we are growing at a far [more] significant rate compared with the big boys. I’m optimistic that within the next five years we will punch through to the top 10,” said Amir, who is also the vice-president of lubricants and downstream business for Petronas.

PLI started in 2008 from the union of Italy-based FL Selenia SpA — which was then Europe’s largest independent producer and marketer of branded automotive lubricants and functional fluids — and Petronas’ own lubricant unit. Petronas had acquired FL Selenia for about €1 billion (RM4.01 billion) in 2007 from the affiliates of United States investment firm Kohlberg Kravis Roberts & Co LP.

Amir said PLI now owns and operates seven facilities, while it uses more than 28 other toll blenders to produce additional capacity. This is on top of the over 30 marketing offices it has in 23 countries, which are managed through five regional offices.

“If you look at our own in-house system capabilities, it will give us like 650 million litres per year. The balance, we outsource to toll blenders. The toll blender’s volume we can adjust,” he said.

He said that last year PLI produced just over 800 million litres globally to feed its sales in the five continents it is in.

“And it [the sales figure] has been growing in double-digits every year, so we’ve been fairly aggressive.”

In Malaysia, PLI only sold about 56 million litres last year.

“It’s little in the overall scheme but it’s still a market for us. We are No 2 [locally] at this point of time, first is Shell. They have been around longer, so we are playing catch up.

“But if you look back at maybe 15 years [ago], we were probably in the lower single digit [in terms of market share] here. Last year, we held a 23% market share. Not bad if you consider that we’re competing with a company that has been in the market for 100 years,” said Amir.