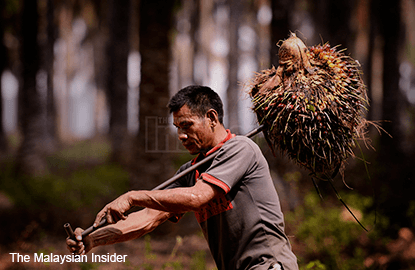 KUALA LUMPUR (Feb 2): Plantation counters were the largest decliners in early trades on Bursa Malaysia today as the government's move to raise foreign workers' levy is expected shave off planters' forecast earnings by 1% to 8% in financial year 2016 (FY16).

Sime Darby Bhd was the third largest decliners on the local bourse, down 40 sen or 4.96% at RM7.67, with 1.17 million shares changing hands.

Deputy Prime Minister Datuk Seri Ahmad Zahid Hamidi had announced that the government's decision to restructure the levy rate system for foreign workers into two categories was expected to boost the country's income by an additional RM2.5 billion.

Zahid had said the first category, which involved foreign workers in the manufacturing, construction and service sectors, would now see a levy of RM2,500 for each worker.

The second category involves the plantation and agriculture industries, where the levy for plantation workers has been increased to RM1,500 from RM590 for each foreign employee.

In a note today, CIMB Investment Bank analyst Ivy Ng said the additional labour costs to be borne by planters could crimp the earnings forecasts for Malaysian planters under the research firm's coverage by 1% to 8% for financial year 2016.

She said the potential earnings cut on FGVH and Hap Seng Plantations Bhd is higher due to their lower earnings base and higher earnings exposure to palm oil.

"Employers may need to bear the cost of higher levy. We gathered that the plantation companies have historically absorbed the costs of the foreign workers' levy," she said.

"It is still early to tell if the plantation industry intends to absorb or pass on the additional costs to the workers.

"We believe the Malaysian planters may absorb most of the costs initially, in view of shortages of estates workers in Malaysia," she added.

CIMB Investment Bank has maintained its "neutral" rating on the plantation sector as news of higher foreign workers levy could dampen optimism on the sector from the expectation of stronger crude palm oil prices.

"Share prices of some big-cap plantation companies in Malaysia rose by up to 9% last Friday on optimism of a stronger ringgit and potential B10 implementation in Malaysia," she added.