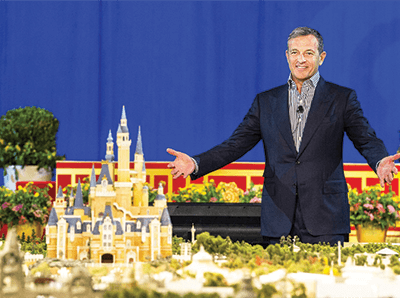 THE Walt Disney Co has just unveiled key creative elements of the new Shanghai Disneyland, the first of its kind in Mainland China. Including its six themed lands filled with world-class attractions and live entertainment spectaculars — many of them a first for a Disney park ­— this new facility is designed with Chinese consumers in mind and tailormade to their needs and interests.

“We are building something truly special here in Shanghai that not only showcases the best of Disney’s storytelling but also celebrates and incorporates China’s incredibly rich heritage to create a one-of-a-kind destination that will delight and entertain the people of China for generations to come,” said Disney chairman and chief executive officer Bob Iger. “We are taking everything we've learned from our six decades of exceeding expectations — along with our relentless innovation and famous creativity to create a truly magical place that is both authentically Disney and distinctly Chinese.”
Since breaking ground in 2011, Disney and its partner Shanghai Shendi Group announced that they were expanding the park by adding additional attractions and entertainment to allow more guests to have a spectacular Disney experience. The new Shanghai Disneyland is expected to open in 2016.
Mickey Avenue is the first main entry at a Disney park inspired by the colourful personalities of Mickey Mouse and his pals. In the neighbourhoods of this whimsical avenue, guests will share a hug and get a photo with all-time favourite Disney characters. Avenue M Arcade, one of the many shops along the avenue, will feature a large selection of gifts and collectibles inside the theme park.
Fantasyland, inspired by Disney’s animated films, will be the largest land and home to the Enchanted Storybook Castle. Experience familiar Disney stories as they ride Voyage to the Crystal Grotto, go in and out of tunnels glowing with dazzling diamonds on Seven Dwarfs Mine Train and take flight over the skies of London on Peter Pan’s Flight. Immerse in a newly discovered lost world in Adventure Isle, blaze your own trails at Camp Discovery, travel around the world on Soaring over the Horizon or embark on the thrilling rafting adventure through the heart of Adventure Isle on Roaring Rapids.
Treasure Cove will be the first pirate-themed land in a Disney park, a place to join the adventures of Captain Jack Sparrow and Davy Jones. Pirates of the Caribbean — Battle for the Sunken Treasure then transforms a boat ride into a journey with cutting-edge innovations in robotics, animation, set design and multimedia.
Tomorrowland celebrates the limitless possibilities and optimism of the future in Shanghai. Disney’s innovative use of technology has produced a land where guests will go to infinity and beyond on Buzz Lightyear Planet Rescue, a new space ranger adventure, or break the bonds of gravity on Jet Packs. A massive, colour-shifting canopy will lure guests to TRON Lightcycle Power Run, a coaster-style attraction where guests board a train of two-wheeled Lightcycles for one of the most thrilling adventures at any Disney park.
Nearby Tomorrowland will be two experiences created especially for Shanghai Disneyland — Star Wars Launch Bay and Marvel Universe. In a celebration of the Star Wars Galaxy, guests will meet heroes and villains of the saga, visit iconic intergalactic set-pieces, view props and memorabilia from the most recent episode, and be immersed in the Skywalker story through a state-of-the-art cinematic experience. In Marvel Universe, guests attend a multimedia mission briefing on the world of Marvel, get up-close with some popular Marvel Super Heroes and take on the role of comic book artist as they learn to draw some favourite characters.
There are two wonderful options as far as accommodation is concerned — the Shanghai Disneyland Hotel is an elegant Art Nouveau-inspired resort with a touch of Disney magic and imagination, while the Toy Story Hotel immerses guests in a world inspired by the toys from the Disney Pixar series of Toy Story animated films.
Regular updates on Shanghai Disneyland are available on www.shanghaidisneyresort.com.cn.