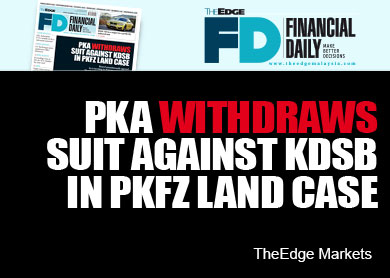 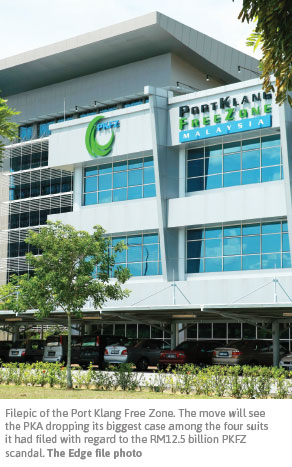 PORT KLANG: In a shocking move related to one of the nation’s biggest scandals, the Port Klang Authority (PKA) has decided to withdraw its RM720 million suit against turnkey contractor Kuala Dimensi Sdn Bhd (KDSB) over the Port Klang Free Zone (PKFZ) fiasco.

The Edge Financial Daily has learnt that the PKA board unanimously agreed to discontinue the suit in a special meeting in Putrajaya last Friday.

According to sources, seven of the nine directors present at the meeting also decided that it will initiate negotiations with KDSB for it to withdraw its suit against the PKA.

The move, which is set to ring alarm bells among the public and the corridors of powers, will see the PKA dropping its biggest case among the four suits it had filed with regard to the RM12.5 billion PKFZ scandal.

The PKA filed the suit against KDSB on Sept 25, 2009, seeking rectification of the agreement signed on Nov 12, 2002, for the land worth RM1.88 billion. It sought a declaration that it should not be charged an interest of RM720 million on the balance purchase price of the land under the agreement and sought a refund of the interest paid to KDSB.

The PKA contended that mistakes and fraud were involved in the agreement and that the value of each square foot of the land should be RM21 and not RM25.

It also claimed that the purchase price was inclusive of interest as stated in the agreement and that it would be paid over 15 years.

On Feb 7, 2012, the Shah Alam High Court allowed KDSB’s application to strike out the suit but on June 25 that year, the Court of Appeal reinstated the suit and allowed the PKA’s appeal.

Last year, the Federal Court refused to grant leave to KDSB to appeal. The PKA’s decision to withdraw comes just two months after Tan Sri Kong Cho Ha was appointed its chairman. The PKA is under the purview of the transport ministry and Kong was a former transport minister.

Sources said the PKA board’s decision came after lawyers Skrine & Co had issued a letter saying the case was weak. It is learnt that the PKA subsequently wrote to the Attorney-General and the transport ministry for their advice.

“However, both did not make a stand, saying PKA needed to make a decision on its own since the suit was initiated by the statutory body itself,” said a source.

It is believed that the proposal to withdraw the suit faced many queries from a representative of the finance ministry on the board.

During last Friday’s meeting, the proposal to withdraw the suit was passed without board members Datuk Dr Mohd Isa Hussain from the finance ministry and Datuk Badaruddin Mahyudin from the Public Private Partnership Unit.

According to sources, the advice to withdraw was due to implications from the case of former transport minister Tun Dr Ling Liong Sik, who was charged and later acquitted, for misleading the Cabinet on the land valuation. It is learnt that some of the witnesses in this suit were the same and the acquittal had seriously impacted the decision.

The board is also said to have weighed the cost of continuing the legal suit and losing the case.

It is said that some RM3 million had been spent on the PKA cases, and up to an additional RM1.5 million may be incurred on this case alone.

Another suit against KDSB and project consultant, Bernard Tan (of BTA Architect), over development and supplemental agreements, signed between February 2003 and November 2006 is still pending in the Shah Alam High Court.