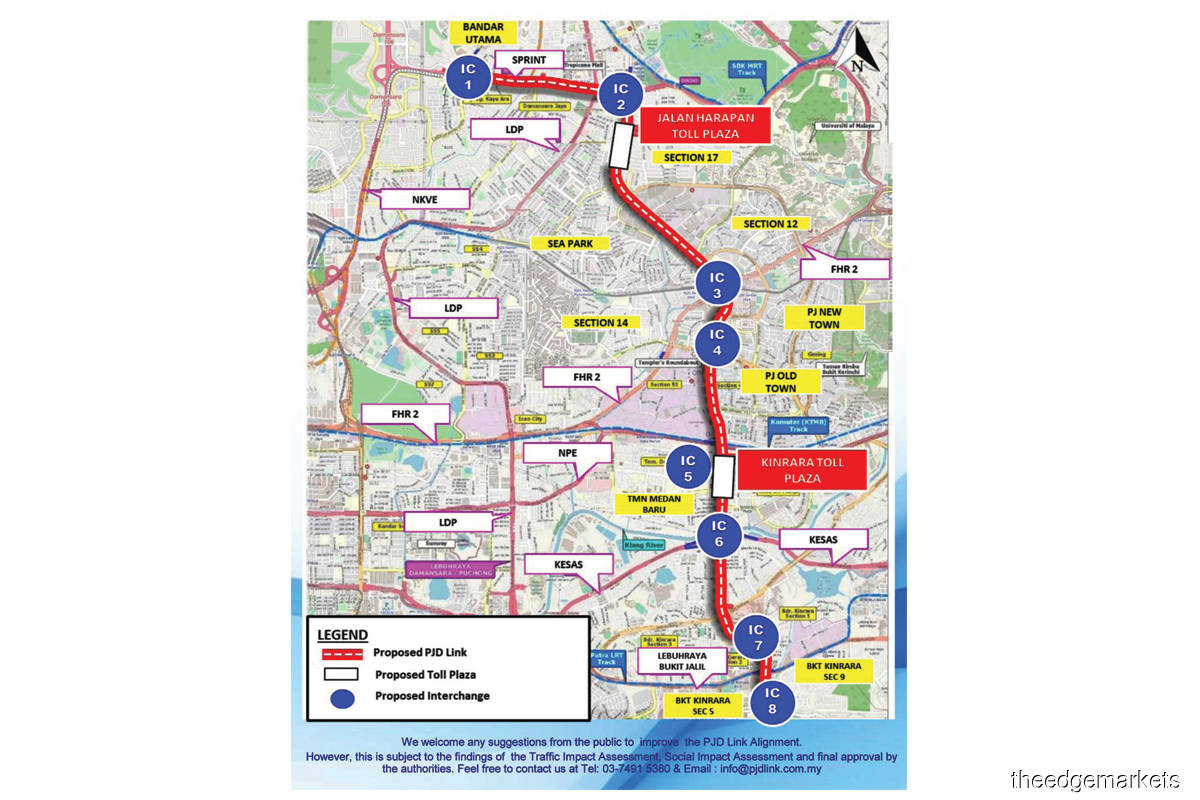 PRIVATE construction firm PJD Link (M) Sdn Bhd, which is proposing to revive a multibillion-ringgit highway project across Petaling Jaya, Selangor, has yet to get the go-ahead from the Selangor state authorities for the proposed highway.

“Submission of official documents and applications to the Petaling Jaya City Council (MBPJ) and Selangor state authorities are essential for regulatory approval and scheduled to be completed by the second quarter of 2022,” its executive director Amrish Hari Narayanan said in a letter to Selve Sugumaran Perumal, the chairman of Section 14 Residents Association, dated Aug 7, 2021. A copy of the letter was obtained by The Edge.

Amrish was responding to talk that PJD Link (M) had received approval from MBPJ and the Selangor state government on the quiet and without due process. In January, Selangor Menteri Besar Amirudin Shari reportedly said it was “unfair” for critics of the proposed Petaling Jaya Dispersal Link (PJD Link) highway to equate the project with the previously scrapped Kinrara-Damansara Expressway (Kidex), a comment that PJD Link opponents see as a move in support of the proposed highway.

Calling the allegations “baseless” and “entirely false”, Amrish said in the letter: “Not only do we need to adhere to stringent regulatory approvals from MBPJ, the Selangor state and federal governments, but our banks will scrutinise every detail to ensure there is full compliance in every aspect.”

Still, plans for the proposed highway have taken a major step forward. Amrish told The Star Metro on July 31 that the company had received approval from the Malaysian Highway Authority (MHA) and the Highway Planning Unit under the Works Ministry to proceed with the next stage of planning on its alignment.

In the letter, Amrish said PJD Link (M) is proposing the alignment of the proposed highway to run along Jalan Penchala and Jalan Sultan (PJ Sentral), crossing the Federal Highway towards Jalan Professor Khoo Kay Kim (previously known as Jalan Semangat) and Jalan Harapan, and then turning west along the Sprint Highway towards the New Klang Valley Expressway Damansara toll plaza. Meanwhile, an earlier proposal to follow part of Sungai Penchala’s alignment is no longer a favourable option.

“We now have a firm proposed alignment after having substantive discussions with MHA and other government departments. This represents a small milestone for us,” he added.

Amrish said the alignment map and proposed exit/entry ramp locations would be released to the public, but he did not disclose the date.

He conceded, however, that the Covid-19 pandemic had delayed its plans, including preparation of the traffic, social and environmental impact assessments, as well as engaging the public via townhall meetings.

‘Private-sector initiative with no government subsidies’

When contacted by The Edge, Amrish says he is still unable to determine the cost of the project until the alignment is finalised. The cost of the previous controversial Kidex project, which was scrapped six years ago by then Selangor Menteri Besar Datuk Seri Mohamed Azmin Ali, was said to be RM2.4 billion.

PJD Link (M)’s proposal is to build a 34.3km four-lane elevated expressway with eight interchanges over three years. There will also be two toll plazas on the proposed highway — one at Jalan Harapan and another at Kinrara.

“This is an infrastructure project without any subsidies from the state or federal government, including the land acquisition cost. We are forking out every sen of our own plus borrowings from private banks,” said Amrish in the letter. PJD Link is 70%-controlled by businessman Tan Sri Hari Narayanan Govindasamy and his family via private vehicle Noblemax Resources Sdn Bhd. The remaining 30% is held by PJD Link Holdings Sdn Bhd, which is majority-owned by Mansor Salleh @ Md Salleh.

PJD Link (M), as the project concessionaire, will be collecting tolls over a period of time to recoup its investment.

The proposed highway comes at a time when some existing highway concessionaires are not generating enough money to pay back bondholders. On Aug 2, local rating agency Malaysian Rating Corp Bhd had warned that toll-road concessionaire MEX II Sdn Bhd’s RM1.3 billion sukuk and RM150 million junior bonds remained at risk for imminent default. “MEX II faces a looming repayment of RM68.7 million on Aug 27, followed by a further RM38.2 million on Oct 29. [However,] it had reported cash of just RM7.8 million in its finance service reserve account at end-May,” it said.

In the letter, Amrish stated that PJD Link would help ease traffic flow in Section 13 and PJ Sentral, which are fast developing into a new city centre.

“PJD Link will remove many cars from the existing roads at ground/street level by putting them on the elevated highway, thus traffic will become more manageable at the street level.

“For residents living or working around Jalan Templer (Seksyen 1, 2, 3, 4, 5 and 6), the new highway built along Jalan Penchala will divert peak-hour traffic away from the severely congested Jalan Templer. For vehicles heading southbound to Puchong and Taman Medan, you no longer need to squeeze through the narrow Jalan Templer to gain access to the New Pantai Expressway,” he said.

Maria Chin Abdullah, Member of Parliament for Petaling Jaya, says until the traffic, social and environmental impact assessments are completed, the proposed highway is still a no-go. “It has to go through a series of consultations from federal to state to council levels plus feedback from the residents,” she tells The Edge.

“As far as I am concerned, we don’t need elevated highways in PJ. We need a good public transport system that can take the elderly, the schoolchildren, the shoppers, the workers to the social and economic amenities such as hospitals, market schools and libraries.

“I won’t deny that we need to resolve the traffic congestion, but there are other ways, for example, a thorough review of our public transport system to increase buses and walkways to connect buildings like those at Ampang Park. There is a serious need to reduce our carbon footprints and not create more to pollute the environment. Besides, when Pakatan Harapan came in as the government (from 2018 to February 2020), we did say we wanted to move towards reduction, if not to get rid, of tolls. Our promise to the people must be upheld.”