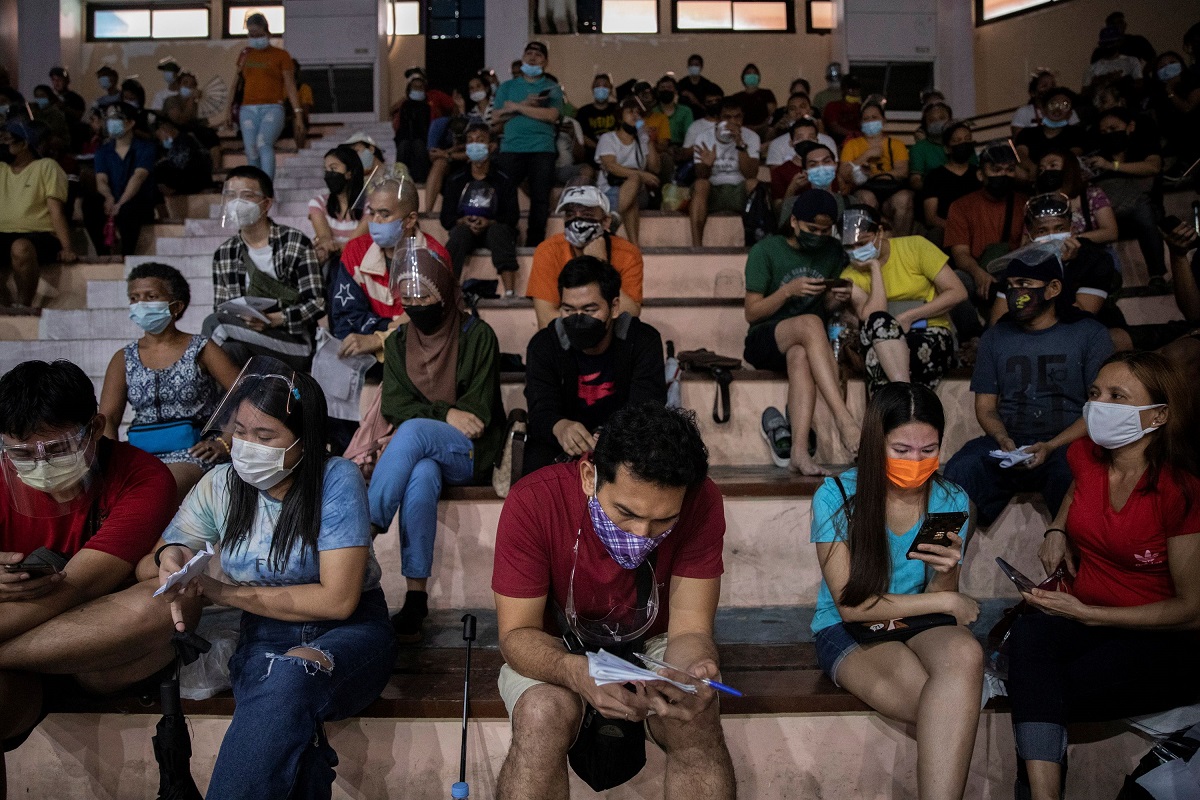 Filipinos use their smartphones while queueing for free vaccination against Covid-19 at San Andres Sports Complex in Manila, Philippines, July 21, 2021. (Photo by Reuters)

MANILA (July 30): Philippine President Rodrigo Duterte on Friday approved the imposition of lockdown measures in the capital region, in a bid to contain the spread of the Delta coronavirus variant and to shield the country's medical system.

The Manila capital region, a sprawl of 16 cities home to more than 13 million people, will be placed under the tightest quarantine curbs from Aug 6 to 20, Presidential spokesman Harry Roque said in a televised address. "While it is a painful decision, this is for the good of all."

The lockdown, which is expected to cost the economy US$4 billion, will prevent people leaving their homes, except for essential shopping, while indoor and al fresco dining is banned.

"Delta is all over Metro Manila already. This is proper intervention," Benjamin Abalos, chairperson of the capital's council of mayors, told Reuters.

The highly transmissible Delta variant, first detected in India, has spread rapidly across much of Southeast Asia.

The Philippines also extended a ban on travellers coming from 10 countries including India, Indonesia, Thailand, and the United Arab Emirates to Aug 15.

Already battling the second-worst coronavirus outbreak in Asia, the Philippines has so far recorded over 1.57 million confirmed Covid-19 cases and more than 27,000 deaths.

The country has reported 216 cases of the Delta variant, but health experts say there could be more undetected cases because of the slow pace of the country's genome sequencing.

The second wave in the Philippine outbreak peaked in April but infections have started to rise again in recent weeks. Currently hospital occupancy in the capital area is 49%, while the rate for intensive care beds is 58%.

With only 7% of the country's 110 million people fully vaccinated, tens of millions remain vulnerable to Covid-19.

The lockdown prompted investors to sell down stocks, with the Philippines' index slumping 3.5% to its lowest close in more than nine weeks.

Economic Planning Secretary Karl Chua told reporters the lockdown could cost the economy 210 billion pesos (US$4.18 billion), cut 444,000 jobs and increase the number of poor people by up to 177,000.