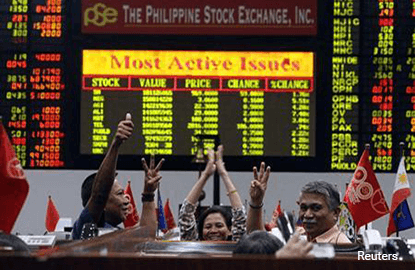 Unofficial sample vote counts pointed to a second round between the incumbent Basuki Tjahaja Purnama and Anies Baswedan, a former education minister, after neither appeared to win a majority in Wednesday's election.

The General Elections Commission is expected to announce official results in around two weeks, and the earliest a second round will be held is April.

PT Bank Mandiri Tbk fell 2% to close at its lowest level in nearly two weeks. The biggest Indonesian bank by assets reported a 32% drop in its 2016 net profit on Tuesday. Trading volumes were nearly thrice the 30-day average.

"We are the outlier in the region, but again it's a technical rebound," said Victor Felix, equity analyst at AB Capital Securities.

"There is a lack of catalysts right now ... starting end of this month or beginning of next month we should see a downtrend coming up to the (US Federal Reserve) meeting."

Vietnam stocks snapped four sessions of gains to close 0.3% lower, off from the nine-year high hit earlier in the session.

Banks, which led the previous session's rally, were the biggest drags on the index. Vietcombank fell 1% to its lowest close in more than three weeks.