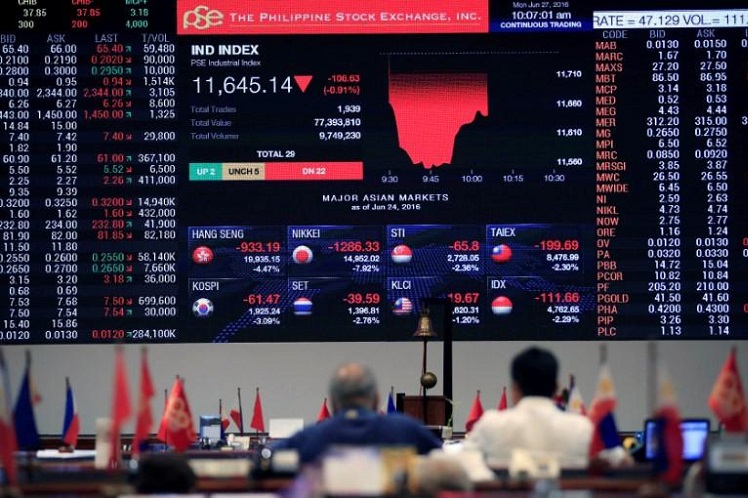 (July 6): The Philippine stock market failed to join a broader regional rally led by a surge in Chinese shares on Monday, as a spike in new coronavirus cases in the Southeast Asian country stoked fears of fresh economic restrictions.

Stock markets across emerging and developed parts of Asia, including India, Malaysia, Singapore and South Korea, rose at least 1% as Shanghai surged more than 5% to touch its highest levels in more than two years.

The US dollar also weakened against most of its Asian peers, with the Philippine peso advancing the most.

However, the single-highest daily jump in Covid-19 cases on Sunday in the Philippines dragged local shares 0.7% lower on the prospect of fresh restrictions that would deal a blow to hopes of a swift economic recovery.

The 2,000-plus cases reported on Sunday was a "shocker", said Nicholas Mapa, ING's senior economist for Philippines, adding what was most worrying was infections outside the capital in areas less well equipped to handle an outbreak.

In Malaysia, where a small majority of economists polled by Reuters expect an interest rate cut on Tuesday, shares climbed to their highest in nearly a month.

HSBC's Chief ASEAN Economist Joseph Incalcaterra errs on the side of a hold on rates by Bank Negara Malaysia and said in a note on Monday that Malaysia still has more policy space than others and has no particular urgency to act now.

Malaysia has already cut rates three times this year to 2%, the lowest level it has ever been.

The yield on Malaysian 10-year bonds traded roughly in line with Friday's close, its lowest since May.

Markets in Thailand were closed for a holiday.