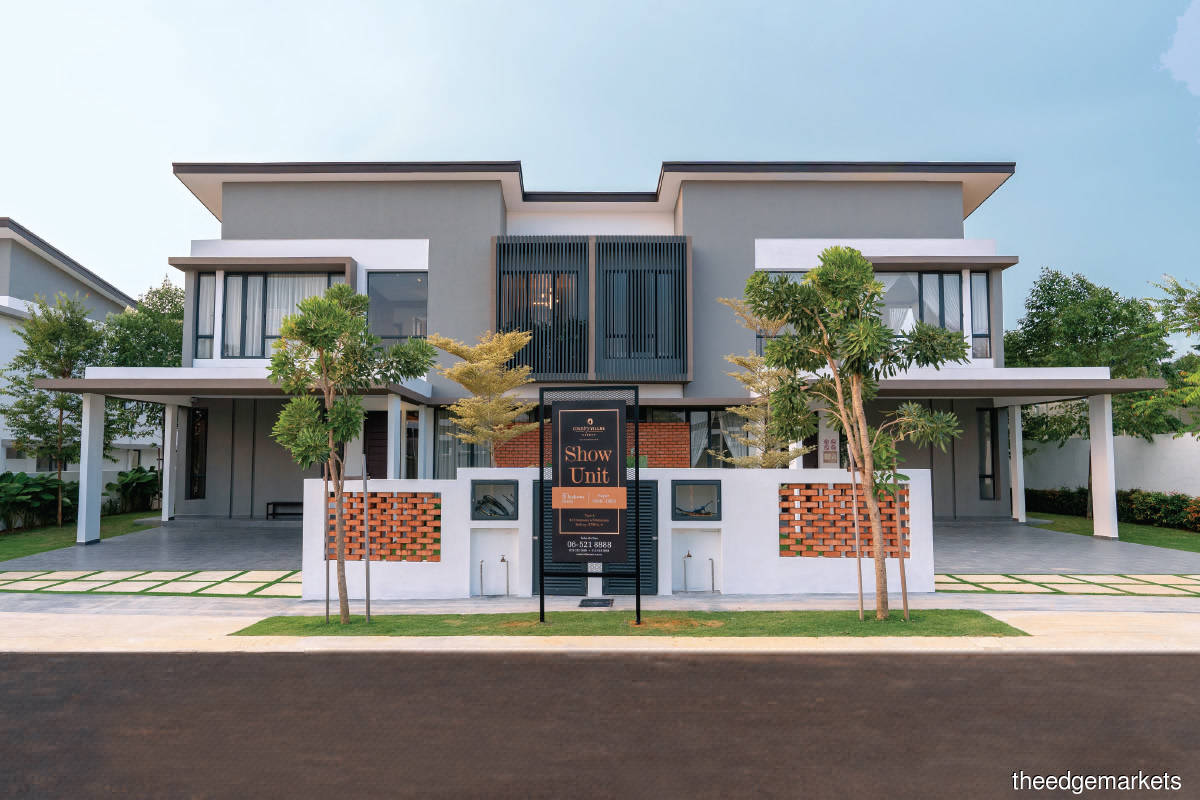 While the pandemic has had a negative effect on the property market, some projects have beaten the odds and done well. In Melaka, Country Villas Resort Sdn Bhd has achieved a take-up rate of 60% for the St Andrews 2-storey homes under Phase 5 of Country Villas Resort, which was launched last October.

Occupying a 136-acre leasehold tract, the development is designed like a holiday resort. As it is located close to golf courses, the developer decided to name each phase after a world-famous golf course. The bungalows’ design incorporates a garden courtyard within a U-shaped building, with five en-suite bedrooms and a family hall — located on the first floor overlooking the courtyard — that can be converted into a home office.

Meanwhile, the semidees will measure 50ft by 80ft, with built-ups of 3,700 sq ft, and are priced from RM905,000, or RM245 psf. Each unit will have four en-suite bedrooms, two courtyards and enough space to park three cars. A ground-floor en-suite alcove can be used as a guest room, home office or space to suit the lifestyle needs of the residents, such as a games room. So far, half the units have been sold.

“Our original plan was to launch our Phase 5 show units after Chinese New Year last year. However, with the Movement Control Order imposed in March 2020, we had to put our scheduled launch on hold,” says executive director Joe Cheong.

“But we had completed the interior design of our semidee show units, which are strategically located opposite our Central Park. We then received many enquiries from our residents. In September 2020, we decided to open up our show units to our residents purely for their viewing only, subject to strict SOPs.”

The residents, impressed by what they saw, “pushed” the developer to launch the St Andrews homes.

“Because of the positive feedback and interest by residents, the management decided to launch Phase 5 in October,” says general manager Chan Siew Lee. She adds that buyers of units in Phase 5 are mostly related to residents already living in Country Villas Resort or those who heard about it by word of mouth. The living room of the show unit, which is airy and spacious (Photo by Country Villas Resort)

How it all began

“The original investor completed the [Orna Golf & Country Club] golf course — covering an area of 462 acres — but the remaining parts, spanning 377 acres, were not built, owing to the onset of the Asian financial crisis.”

Chan says the original investor then invited Tan Sri T C Pang, CEO of Mamee-Double Decker, to purchase the remaining parcels. Pang was attracted to the land because of its strategic location and he invited other investors to join him in acquiring the tract.

“Tan Sri roped in several close friends, including the family of our executive director Joe Cheong, to join this venture. Joe’s grandfather had been a property developer in Melaka since the 1960s,” Chan adds.

Once acquired, some initial issues needed to be taken care of before development could commence. “The major challenge for the development was that the overall sub-divisional and layout plan for the residential component had been approved in 1992 and individual building titles had been issued,” says Cheong.

“With the individual building titles already issued, it was extremely difficult, costly and time-consuming to try to revise some outdated layouts to suit current trends, tastes and expectations.”

Fortunately, with the help from the authorities, these issues were dealt with. “The Majlis and Pejabat Tanah (Land Office) have been very helpful to speed up the whole process. That is why our development is a bit slow compared with other developments, as we have to deal with all the difficulties,” says Chan.

By 2012, the majority of the issues had been resolved and, in 2013, the Augusta 2-storey terraced houses were launched.

The facilities provided include 14.5 acres of space for greenery and outdoor facilities such as a five-acre Central Park, two basketball courts, a futsal court, an outdoor badminton court, a pavilion with a stage and toilets, two cabanas, a 2.6km jogging/cycling track, a children’s playground and 20 to 30 units of outdoor gym equipment, according to Chan.

In terms of security, there is an anti-climb perimeter fencing, guard patrol, CCTVs and an access card system. Meanwhile, the entire development has been Unifi-ready since 2016.

Although it is not a strata-titled development, residents have to pay a flat maintenance fee based on their unit type — a monthly fee of RM80 for terraced houses, RM90 for semidees and RM100 for bungalows — after signing a deed of mutual covenants.

“Admittedly, many of the extra features are costly and we probably make far less profit per unit than similar developments elsewhere. We are confident that the additional features we offer will provide long-term value creation and appreciation for the entire project, and our buyers’ investments in Country Villas Resort will be fulfilling and enriching,” says Cheong.

Chan adds that the developer has a small maintenance team to help residents with minor matters in their house. If the situation is major, the developer will help call in the proper authorities and services. Even though this is not part of the main job of a developer, Chan believes this small effort will encourage residents to be “promoters” of the development in the long term.

Currently, Country Villas Resort residents comprise professionals such as doctors and lawyers, young families and retirees, and the occupancy rate is 80%. There are about 54 acres left to develop at Country Villas Resort, with plans for 172 semidees and 380 terraced houses. Cheong shares that the developer will launch no new projects in 2021 but will instead prepare the show units for Phase 6, with 128 terraced villas planned, and Phase 7, with 64 semidees and bungalows. It will take at least five more years for Country Villas Resort to be fully developed.

Cheong and Chan say that, besides this project, the company is already planning the development of another parcel near Country Villas Resort, which Pang had acquired from the original investor.

“Prior to MCO 1.0, we were studying proposals to turn the hotel and water theme park components of the original privatisation project into a mix of Bali-style villas and water chalets, with an emphasis on sport, leisure and fitness facilities,” says Cheong.

“However, with the current state of the tourism industry, we will need to relook at the initial proposals as these earlier studies relied heavily on buyers from outside Melaka and Malaysia.”

Chan says, “We are exploring the possibility of converting some portions originally slated for holiday chalets and villas into a premier retirement village, where golf and other leisure pursuits take centre stage. We have also been approached to study the setting-up of an international school at our commercial component. However, these are all at the preliminary discussion stage.”