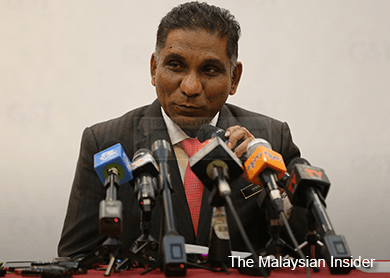 DAP's Serdang MP Dr Ong Kian Ming said these issues cropped up in a report by Parliament's Public Accounts Committee (PAC), which showed creative accounting in PFI to give the impression that Malaysia's debt was manageable.

One was the Treasury's own admission that keeping PFI's expenditure off-budget allowed it to maintain Malaysia's debt levels and ratings, despite the RM27.9 billion in liabilities the firm has raked up since its inception in 2006.

"You know this is off-budget. It doesn’t come in to the government so that why you know our debt level and rating and everything we can maintain," Treasury secretary-general Tan Sri Dr Mohd Irwan Serigar Abdullah had told the PAC during the hearing.

But Ong said Pembinaan PFI's spending should be classified under development expenditure, since it channelled its borrowed funds into the construction of government infrastructure projects.

"But because the government did not want to book this spending under development expenditure, it shifted this spending to operating expenditure whereby the interest payments incurred by Pembinaan PFI could be spread out over time."

The second problem with Pembinaan PFI was that its interest payments were classified under “other payments” rather than under debt servicing, as confirmed by Datuk Dr Mohd Isa bin Hussain, the secretary of the Companies Investment Section of the Government, during the hearing.

The Serdang MP said this was done to show that Malaysia's debt servicing levels were still manageable.

In the report, the government pledged it would "ensure that the debt service charges will not exceed the threshold of 15% of total revenue under the administrative fiscal rules".

But the Finance Ministry had recently revealed it must make annual payments of between RM4.76 billion and RM11.62 billion from 2015 to 2020 for interest payments of nine of its companies, including Pembinaan PFI Sdn Bhd.

"If these payments are added to the debt servicing figure, then the 15% threshold may be breached," said Ong.

Third, Pembinaan PFI's debt did not appear as contingent liabilities, Ong said, adding that this hid the government's total debts.

This was because there were no government guarantees for its debts, even though the PAC report confirmed Pembinaan PFI was using government money to finance its debts.

"Not only are the debts and expenditure of Pembinaan PFI an off-budget item, they do not appear as a contingent liability since there is no government guarantee for its debts.

"Even part of the loans of 1MDB is government guaranteed (RM5.8 billion) and as such appears on the list of contingent liabilities which totalled RM157.5 billion at the end of 2013."

Another issue is the fact that Pembinaan PFI has never been audited by the Auditor-General's Office, despite having accumulated billions of ringgit in liabilities as of 2013, said Ong.

"In his testimony to the PAC, deputy head of the National Audit Department Datuk Anwari Suri admitted that his office has not audited Pembinaan PFI Sdn Bhd because it was only included in the gazetted list under the A-G’s office this year i.e. 2015.

"Even the PAC chairman was amused when he heard this news. He said: 'Maknanya nak dekat 10 tahun baru gazet syarikat ini sebagai kena audit' (this means only after nearly 10 years, this firm is included under the gazetted list)," said Ong.

Ong also asked whether the government could be hiding other debts, given that Irwan admitted during the hearing that foreign rating agencies, such as Standard & Poors and Moody's, were aware of Pembinaan PFI's liabilities.

“Everything they know. Our contingent liability – they know more than Malaysians sometimes," Irwan had said.

"What else do the rating agencies know that Malaysian’s don’t?" asked Ong.

"Is the Treasury revealing information to foreign rating agencies which it is not disclosing in Parliament or even to the Cabinet?"

PFI, the Finance Ministry Incorporated "special purpose vehicle", was set up on September 28, 2006 under the 9th Malaysia Plan to disburse RM20 billion for development projects, with preference to small-scale Bumiputera contractors.

Besides raking up billions of ringgit in liabilities, the Auditor-General's Report 2013 (second series) found that the projects developed under PFI were not on schedule, had poor construction quality and weak monitoring and did not follow specifications. – The Malaysian Insider