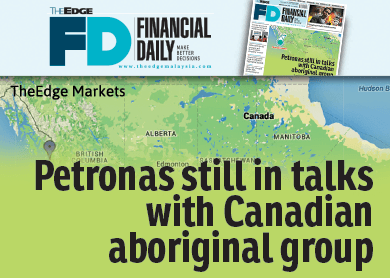 KUALA LUMPUR: A Petroliam Nasional Bhd (Petronas) led consortium has yet to conclude the long drawn out negotiations with the Lax Kw’alaams First Nation group on the oil company’s plan to build a gasification terminal to export liquefied natural gas (LNG) at the port of Prince Rupert, western Canada.

The consortium’s Pacific NorthWest LNG project is required to have the consent of the Lax Kw’alaams to construct a LNG terminal within their territory. The project will liquefy and export natural gas produced by Progress Energy Canada Ltd in which Petronas also holds a controlling stake.

Petronas said an impact benefit agreement offer has been tabled to the Lax Kw’alaams, in addition to offers from both the government of British Columbia and TransCanada Corp.

“Due to [the] negotiations, Petronas would not be able to disclose figures or details of the discussion at this point in time,” the national oil corporation said in a reply to The Edge Financial Daily.

Petronas noted that Pacific NorthWest LNG, the Petronas-led LNG venture in Canada, together with the Canadian government and TransCanada Pipelines Ltd have been in negotiations with the Lax Kw’alaams First Nation group over the last three years.

TransCanada was contracted to design, construct and operate a new natural gas pipeline that will transport the natural gas.

“The Canadian federal and British Columbia provincial governments have delegated the responsibility to consult and accommodate Lax Kw’alaams First Nations potentially impacted by the project to Pacific NorthWest LNG,” it said.

“In addition to benefit packages to First Nations, Pacific NorthWest LNG has enshrined numerous commitments and design changes in the environmental assessment process to address the concerns of the community, particularly in relation to collaborative environmental management in the marine environment and salmon habitat,” said Petronas.

Local media in Canada reported that an offer worth more than C$1.1 billion (RM3.29 billion) by the Petronas-led consortium has been presented to over 3,000 members of the indigenous community, in exchange for their consent to build the LNG terminal over several decades.

The Globe and Mail reported that the Lax Kw’alaams will get to vote in a series of meetings held in three communities which started on Monday and ends on May 12, by a show of hands.

Obtaining their consent is one of the regulatory hurdles that the Petronas-led consortium needs to cross in Canada, besides the environmental issues that it encounters on extracting shale gas.

The investment in Canada is crucial to the national oil firm as it would enable Petronas to have sustainable supply of LNG in the future.

This article first appeared in The Edge Financial Daily, on May 6, 2015.