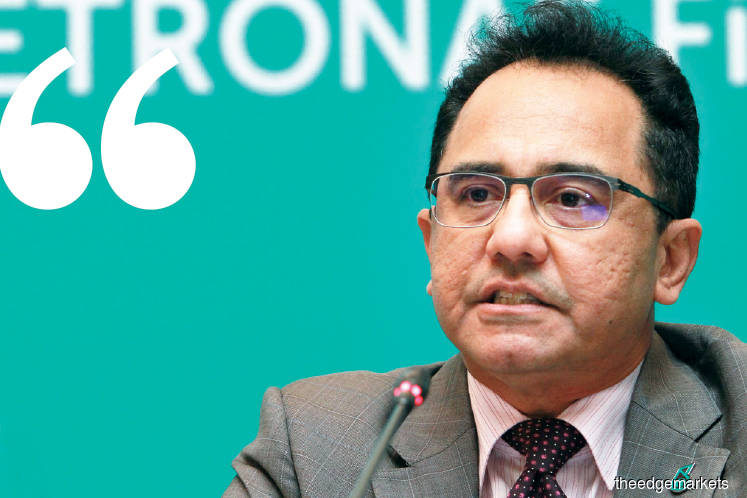 MORE jobs and contracts are seen in the oil and gas industry this year, particularly in the upstream sector.

Petroliam Nasional Bhd (Petronas) is set to increase its capital expenditure for the first time in three years on the back of the recovery in oil prices and its ongoing cost-efficiency drive that boosted profit in 2017 to a level not seen since 2013.

Petronas will spend “around RM55 billion” this year on capex with a higher commitment to upstream development. The national oil firm spent RM44.5 billion on capex in 2017 — down 11.7% from 2016 — with a focus on the downstream sector.

However, he warned that the industry is not out of the woods yet. “While it may seem that we have left the depth of [the industry] downturn behind us, I would like to caution that the outlook is not all blue skies.

“The recovery in oil prices we have seen is supported by Opec (Organization of the Petroleum Exporting Countries) and non-Opec voluntary production cuts. And the sustainability of these price levels remains to be seen,” said Wan Zul, who will be at Petronas’ helm for three more years as he recently renewed his contract with the group.

He added that Petronas will adhere to any production cuts committed under the voluntary agreement, which amounts to 20,000 bpd for Malaysia.

On dividend payouts, he said Petronas will allocate RM19 billion to the government — an increase of RM3 billion — in line with the better performance in its financial year ended Dec 31, 2017 (FY2017).

Despite fluctuating prices, the gas segment also did better. Petronas saw a record delivery of 443 liquefied natural gas (LNG) cargoes in 2017, with six deliveries completed by its floating LNG facility, FLNG 1. Its second FLNG is on track to begin operations by 2020, said Wan Zul.

The uptick, said Wan Zul, was largely driven by higher average realised prices for major products. Brent crude, for example, averaged US$54.27/bbl during the year, higher than the US$43.69/bbl seen in 2016 as well as Petronas’ FY2017 operation benchmark of US$45/bbl.

A weaker ringgit also helped as Petronas’ earnings, borrowings and assets are mostly denominated in US dollars. The ringgit averaged 4.30 against the US dollar last year from 4.15 in 2016.

Moving on, Wan Zul said Petronas “will see some strain” on its financials if the ringgit does strengthen against the greenback this year, as anticipated by pundits. “[But] while the foreign exchange will always impact our financials, we focus on things that we can control. We have no control over prices and exchange rates.

“All our efforts are headed, so we [can be] really good at what we can control,” he said.

An example would be Petronas’ controllable costs, which dipped RM3 billion or 6% year on year to RM45.9 billion in 2017 as part of the Cactus and CORAL 2.0 cost and efficiency initiatives.

“CORAL 2.0 is now acknowledged as a benchmark initiative for cross-management across the whole industry,” said Wan Zul, adding that the group does not see any impairments at levels seen during the oil and gas downcycle “if prices remain at current levels” and if there are no bad surprises at the operational level.

Petronas has benchmarked its operations for 2018 on expectations of oil prices being at US$52/bbl, lower than industry consensus, he explained.

The national oil company will also implement its three-pronged growth strategy: to improve cash generation by fully utilising its assets, growing its resource base and integrated business model, and venturing into new business areas, including speciality chemicals and “new energy” such as renewables.

Wan Zul said Petronas will need to invest in the third strategy to prepare for the future, although internal scenario planning indicates that oil and gas will remain the core business of the group over the next few decades.

“The contribution of renewable energy [to overall energy output] will grow to around 20% by 2030 based on our projection. It will not be our core business but its contribution will grow in time,” he said, adding that the company has already formed a division to assess opportunities in the segment.

On a separate matter, Wan Zul reiterated that Petronas is open to cooperating with Petroleum Sarawak Bhd (Petros) if the conditions precedent are fulfilled. “We welcome the participation of Petros or any other state-owned entity in the O&G business, be it from Terengganu, Sabah or Sarawak, for as long as it is within the arrangement that we have today,” he said, referring to the Petroleum Development Act 1974, which identifies Petronas as the regulator of oil and gas assets in Malaysia.