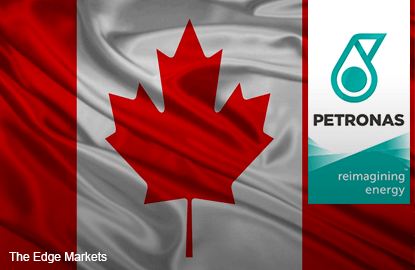 KUALA LUMPUR (March 9): Petroliam Nasional Bhd (Petronas) and its CAN$36 billion Pacific NorthWest liquefied natural gas (PNW LNG) project shareholders will review the final report and evaluate its conditions to further determine the impact on the overall cost structure and the project schedule.

In a statement issued in response to Canadian media reports recently, Petronas said the outcome (of the joint review), considered together with the LNG market outlook and overall project commercially, would be used to develop the proposal for an investment decision by the shareholders.

Two days ago, Financial Post quoting a source close to the project, wrote that the new climate change rules by Canada’s Liberal government might cause Petronas to abandon the project to be located in northern British Columbia, if it fails to get Canadian federal government approval by March 31.

Petronas, which has so far spent US$12 billion to get the project to the current stage, is said to be subject to the new policy introduced by recently-elected Prime Minister Justin Trudeau, said the report.

In response, state-owned Petronas added that Petronas, through its subsidiary Pacific NorthWest LNG, is proactively taking steps to mature the project towards its final investment decision.

“Currently, the Canadian environmental impact assessment process for the PNW LNG project is still ongoing, following which, a final report will be produced by the relevant agency to be submitted to the government of Canada for approval,” it said.

The turn of events comes on the heel of Petronas’ announcement of cutting RM20 billion on capital and operating expenditure till 2020, and a reduction in workforce by 1,000 last week, to cope with the oil rout globally.

Petronas also said part of its business strategy would involve deferring some of its projects, but did not specify which ones.

On what a project abandoment could mean to Petronas, JF Apex Securities Bhd analyst Lee Cherng Wee said the immediate impact would be recognition of loss from initial investment, while the medium term impact would be cost savings and conserve cash.

“According to the report, it seems like Petronas is weighing their options and setting the limit, in order not to incur more costs,” Lee told theedgemarkets.com

Meanwhile, Financial Post said the project on Lelu Island near Prince Rupert has apparently undergone multiple delays and setbacks, including opposition from aboriginal and environmental groups.

It added that Petronas had in February, received a favourable assessment from the Canadian Environment Assessment Agency (CEAA), after getting the nod from the British Columbian government in November 2014.