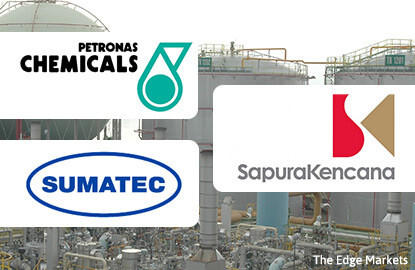 Opec's move is deemed crucial to support crude oil prices at current levels at around US$47 (RM193) a barrel, compared with some US$112 in August 2013.

At 12:30 p.m., Sumatec and SapuraKencana settled at nine sen and RM1.56 respectively.

Bloomberg reported OPEC agreed to the outline of a deal that will cut production for the first time in eight years, surprising traders who had expected a continuation of the pump-at-will policy, which the group adopted in 2014 at the instigation of Saudi Arabia.

Oil jumped more than 5% in New York, after ministers said the group agreed to limit production to a range of 32.5 million to 33 million barrels per day.