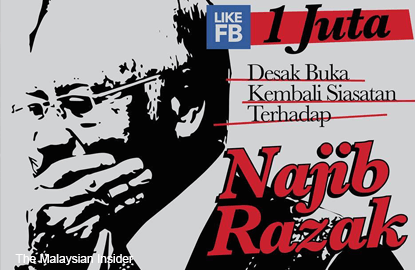 KUALA LUMPUR (Feb 12): A petition to reopen the investigations into Datuk Seri Najib Razak's donation has gained 30,000 signatures as of yesterday, according to the Facebook page "1Juta Desak Buka Kembali Siasatan Terhadap Najib Razak" (one million urge investigations against Najib Razak be reopened).

PKR secretary-general Rafizi Ramli, who announced the petition and the Facebook page on Sunday, said he was quite surprised by the support, adding that he would now go into “hyperdrive” to promote it.

This involved coordinating with other Facebook pages and groups to gain even more exposure and collect signatures faster, he told The Malaysian Insider.

"They have the power to go through the case again and return the investigation papers to the attorney-general for him to look through it again," said the Pandan MP.

But Rafizi said the A-G had no power to stop any authority from continuing to investigate a case.

The A-G could only request for more information, or declare there was not enough evidence for a prosecution, he said.

"The operational review panel is empowered to go through the A-G's decision not to prosecute.

"In fact, the MACC annual report even reveals how many cases the panel has reviewed and sent back to the A-G, with him finally proceeding with prosecution after initially deciding not to."

Rafizi said that the 100,000 signatures would give the operational review panel "strong legitimacy" to look into Najib's case again and return the investigation papers to the A-G.

But he conceded that this may only result in the A-G reiterating that there was insufficient evidence to charge Najib.

"But we can still hammer them in Parliament about it. (We can ask) if the operational review panel says there is enough grounds to prosecute, on what grounds have you decided not to prosecute?" said Rafizi.

"We want this issue to continue and the prospect of a possible prosecution to remain hanging over Najib's head."

Rafizi added that since the petition aims to collect 1 million signatures, he had several milestones in mind until the ultimate target was reached.

He said the second milestone would be 250,000 signatures, but was coy as to what he planned to do then.

"We will see how the dynamics are, then we will decide what is the best way to utilise people power on those authorities and institutions that have power and clout to push this."

The petition requests that the Agong and Conference of Rulers assist in reopening investigations into the funds transferred into Najib's accounts.