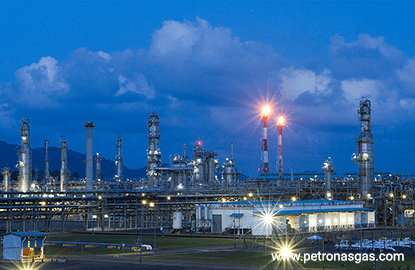 Stripping off the forex impact, PetGas said its profit for the current quarter was actually down 11.1%, due to higher operating costs and tax expenses.

Quarterly revenue was up 2.1% to RM1.16 billion from RM1.13 billion a year earlier, driven by higher utilities revenue, in line with the upward fuel gas price revisions from Jan 1 and July 1, respectively, as well as higher performance-based structure (PBS) income.

It also announced a 15 sen third interim dividend, amounting to RM296.8 million, payable on Dec 2. Year to date (YTD), it has declared 45 sen in dividends, compared with 43 sen in last year’s YTD period.

It said this lower earnings was because the previous YTD period had recorded lower tax expenses due to the recognition of deferred tax assets arising from the investment tax allowance for its plant rejuvenation and revamp.

This is premised on the strong and stable income streams from existing gas processing agreements, gas transportation agreements and regasification service agreement signed with Petroliam Nasional Bhd (Petronas), it said.

"The utilities segment will continue to contribute positively to our results," it added.