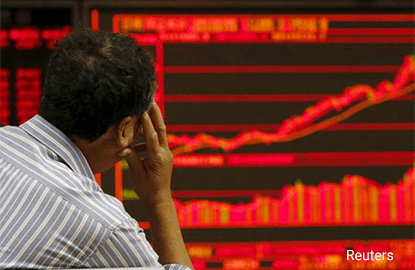 +A
KUALA LUMPUR (July 10): Investors were accumulating shares in Perwaja Holdings Bhd and Kinsteel Bhd, ahead of the former's regularisation plan that scheduled to be submitted to Bursa Securities by end of this month.
This sent the share prices of these two counters up to as much as 7.02% and 6.25% respectively in the morning trading session.
As at 11.02am, Perwaja (fundamental: 0; valuation: 0) was traded at 30 sen, up 1.5 sen or 5.26%, after reaching its highest point so far today at 30.5 sen earlier.
Some 10.99 million shares were seen having been traded between 29 sen and 30.5 sen. With the current price, it has a market capitalisation of RM159.6 million.
While Kinsteel (fundamental: 0; valuation: 0.3) was pared down part of its gains to trad at 16.5 sen, gained 0.5 sen or 3.13%. It has earlier risen to a high of 17 sen after market open.
The counter seen some 4.96 million shares changed hands. It has a market capitalisation of RM167.89 million.
Recall that, Perwaja slipped into PN17 on Nov 26, 2013, and the company was required to submit its regularisation plan to Bursa Malaysia.
The ailing steel producer said in February this year, it has approached China-based alloy manufacturer Zhiyuan Investment Group Co Ltd for the possibility of capital injection of RM300 million, as well as to revive the its steel operations in Kemaman, Terengganu.
It has ceased operations since August 2013 following the gas and electricity supply curtailment by Petronas and Tenaga Nasional Bhd (TNB), with RM450 million still owed to Petronas Gas and TNB as well as RM200 million to the Ministry of Finance.
Despite this, a remisier told theedgemarkets.com that Malaysia Steel Works (KL) Bhd (Masteel) remained as his top pick, given that the company provide better returns to shareholders.
He noted Masteel's Net Tangible Assets (NTA) stood at RM2.36 compared to Perwaja's negative NTA of RM1.88.
"Further, despite Masteel has slipped into losses in first financial quarter, it still declared a final single-tier dividend of 1.3% per ordinary shares to reward shareholders," he added.
He said Masteel's earnings were hit by oversupply situation in major global producing countries such as China.
Masteel posted a core net loss of RM10.71 million in the first quarter ended March 31, 2015 (1QFY15) compared to a net profit of RM7.28 million last year due to lower sales volume and margin.
Interestingly, the remisier has questioned why the exchange regulator had not issued an Unsual Market Activity (UMA) query to Perwaja.
Year-to-date, Perwaja has gained 500% while Kinsteel has seen its share price grew by 10%, outperforming than the FBMKLCI's 0.48% decline.