Perodua to maintain vehicle prices in near term -CEO 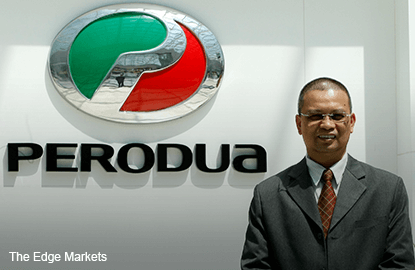 PETALING JAYA (Jan 19): Perusahaan Otomobil Kedua Sdn Bhd (Perodua) has no plans to raise vehicle prices in the near term, despite the weaker ringgit against the US dollar and yen.

"We are sensitive to the current environment of economic slowdown, and will strive to provide affordable vehicles to our customers," Aminar told reporters here today, after presenting Perodua's 2015 performance review.

He, however, declined to specify at what level of the ringgit, Perodua would be compelled to raise prices.

Bloomberg data showed the ringgit was traded at 4.3860 against the US dollar today, compared to the firmest level at 3.5382 over the last one year.

Compared to the yen today, the ringgit changed hands at 3.7311 versus the strongest point at 2.9266 over the last one year. A weaker ringgit translates into costlier vehicle and component imports for Malaysian automotive companies.

According to him, the company sold more than 213,300 vehicles in 2015, backed by strong demand for the Axia, Myvi and Alza models.

But 2016 capital expenditure (capex) is seen lower. Aminar said Perodua's capex was expected to be lower at RM370 million, compared to RM408 million in 2015.

Aminar said the lower capex was due to Perodua's need to preserve cash, amid an economic slowdown.

"Capex has an impact on cash flow, and we want to preserve our cash as best we can, in a difficult environment. Having said that, we will continue investing in our current plants and after sales service," he said.