WHEN IT COMES to houses and choosing your dream home, the decision making process sometimes comes down to this: you’ll just know when it’s the right one. When Englishman Bill Lisle and his Korean wife Miki first walked into their spacious Damansara Heights abode, they knew instantly that this would be home. “The house was actually only three quarters of the way completed when we saw it. But when we stepped in and caught sight of the pool and the greenery — it just felt like home,” he recalls with a smile.

The designer who was then working on the house had quite a few clever ideas that immediately appealed to Lisle and Miki. Firstly was the way the house was so well hidden from the street, so any and all security issues could be put to rest. Secondly was the pocket of greenery that was contained within — a swimming pool with unusual forest green tiles is framed by lush and mature greenery that make the house feel a lot like a holiday resort.

The layout is rather clever — three different blocks, if you will, separate the living spaces for the family, a guesthouse and a space for recreation and relaxation. “I love the proportions and the air flow — it’s always airy and windy, even though we are sandwiched by houses on either side,” Lisle says as he shows us around. “There are a lot of pockets of space for everyone, so we can all be together or have our own privacy.”

Upon signing on the dotted lines, completing the house to their specific requirements turned out to be an easy job as they were very much on the same wavelength as the designer was. Once the couple moved in with their children Sophie, nine, and William, five, they began making it their own, filling it with tokens and treasures collected over the course of their life together across Asia. 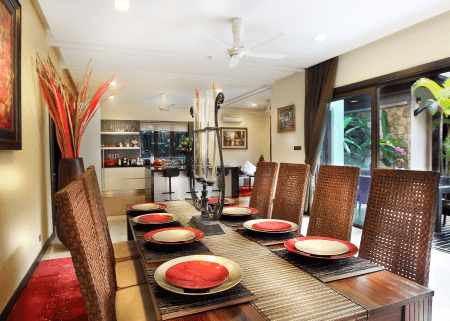 “You don’t see anything European, I don’t think, except perhaps the coffee machine,” Lisle quips. “I like Asian style sensibilities very much and when we started to do the décor for the house, we basically used all things we had been collecting for years. I wasn’t interested in some interior decorator hanging art in my house that they thought was nice — this should be stuff we like in a style we like.”

From the way the house is structured and decorated, that style appears to be resort-inspired, but modern with strong Balinese and Thai themes. From the entryway, a stone path leads past an enviably large shoe storage room and a small bathroom before opening up to a water feature that is anchored by a traditional gong. Resist the temptation to hit it, if you will — I certainly couldn’t. From there, take the direct route to the living area, or detour to the pool — everyone who comes to the house has a different approach, Lisle jokes.

The main L-shaped block consists of a hall, dining and kitchen on a lower floor with the master suite, children’s rooms, guest bedroom and family room on the upper floor. The block facing the street discreetly fits a sauna and home gym, while a fern-fringed pathway leads to a large space on the upper floor that works as entertainment space — William’s train set is permanently set up here, as is Sophie’s piano — or guest quarters, as it’s complete with comfortable seating and an en-suite bathroom. These two blocks look down into the pool, which is flanked on one side by a small guesthouse with one beautifully decorated bedroom and an en-suite bathroom. 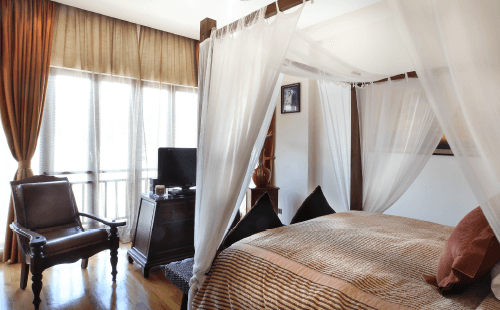 What connects all the spaces of the house is the way it has been decorated — stylish, yet with a warm and lived-in feel. The eclectic mix of fittings and furnishings, which you can easily tell is acquired from years of collecting rather than obtained by one designer at one time, is a beautiful reflection of the owners’ tastes and travels. Beautifully framed pictures of Lisle, his wife and their two children also occupy prominent spots in various parts of the house, which reaffirms the homely and lived-in feel.

Paintings from Vietnam, wooden sculptures from India and Bali — each piece comes with interesting stories behind its acquisition. An elaborate circular carving, for example, was shipped with great difficulty from Bali and as a result holds pride of place against a mirror in a hallway. Meanwhile, carved wooden elephants bow their trunks welcomingly at the door, and decidedly ethnic-inspired giraffes give a dark corner wall some well-needed warmth.

Lisle and Miki favour wooden furniture quite a bit, including the sturdy coffee table, a dark rattan-weave lounge chair and a grand dining table. It’s enhanced with the colour red — from throw cushions, curtains and accents in the kitchen right down to bouquets of blood red roses that leave a delicate scent in the air. Another notable design feature is in the flooring: sections of differently coloured marble inlays in the flooring create the visual impact of a carpet, but without the additional clutter.

The overall effect Lisle and Miki have achieved with the house is that the space is very relaxing, and he says that’s the feedback they get from most of their guests. “The first thing they say is how relaxed they are and how they want to just chill with a glass of wine. The second thing they say is how much we will sell the house for,” he chuckles. “This is home, though, and we love this house so much and we have our favourite spaces too. Sophie and I love the hall most of all, William loves his play space and Miki loves her kitchen and a small space she has in the corner — she can see everything from there and calls it the supervisor’s spot.”

Here’s an interesting ID tip, inspired by Lisle’s own DIY approach to his lovely home: fill your house with people and things you love, and just about everyone will love it too. 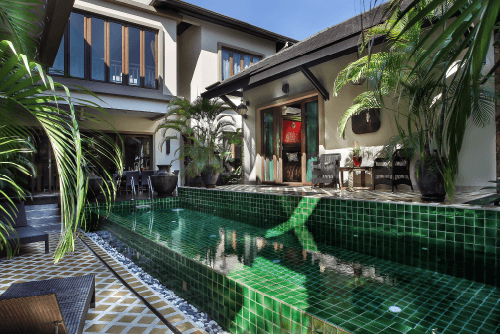