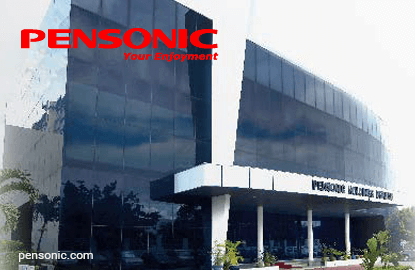 The home electric appliance maker pointed out that it booked in a one-off gain on disposal of property amounting to RM8.5 million in the previous corresponding quarter.

Quarterly revenue grew nearly 15% to RM103.49 million from RM90.04 million due to higher sales from domestic market, it announced to Bursa Malaysia today.

Pensonic declared final dividend of two sen per share for the financial year ended May 31, 2016 (FY16), subject to the shareholders' approval at the forthcoming annual general meeting.

This came after the company declared the first interim dividend of one sen per share yesterday (July 26), which is payable on Sept 15. This brings its full year dividend to three sen per share, lower than 3.5 sen in FY15.

Revenue for the year was almost flat at RM386.11 million from RM385.5 million a year earlier.

Looking ahead, the Penang-based company anticipates that competition will remain intense.

Pensonic said it will expand its market in emerging markets, by promoting and distributing its products to overseas customers through engaging more overseas distributors and business partners.

"We will also continue to devote efforts in research and development of new products in order to keep up with the ever-changing needs of the electrical appliances markets," it added.

Pensonic rose 0.5 sen or 0.75% to settle at 67 sen today, the highest since May this year, for a market capitalisation of RM86.9 million.