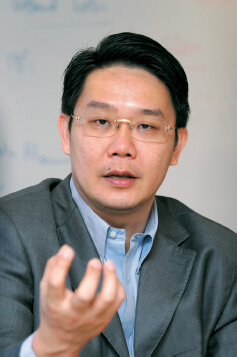 Ooi’s emergence as a substantial shareholder in Tatt Giap has raised questions as to his plan for the steel product manufacturer. Photo by Mhd Izwan Mohd Nazam/The Edge

TAN Sri Alex Ooi Kee Liang may not be a familiar name on the Kuala Lumpur property scene but in Penang, the high-rise developments under his flagship Ideal Property Group are so well known that he has been dubbed “Penang’s Condo King”.

Ooi also has a 20% stake in SRS Consortium Sdn Bhd, which is the project delivery partner of the Penang Transport Master Plan. The other shareholders of the PDP are Gamuda Bhd (60%) and Loh Phoy Yen Holdings Sdn Bhd (20%).

Now, the 46-year-old has emerged as a substantial shareholder in Tatt Giap Group Bhd, a Penang-based manufacturer and trader of stainless steel pipes, tubes and bars, electro-­galvanised steel, perforated metal products and other ferrous and non-ferrous metal products.

The question is, why is Ooi interested in a company that has been in the red for some time now?

The stock closed at 18 sen last Monday, giving the company a market capitalisation of RM30.7 million. Compared with its closing price of 11 sen on Feb 2 last year, Tatt Giap’s share price was up 64%.

Ooi became a substantial shareholder of the company on Dec 26 last year with the purchase of 13 million shares, bringing his total holding to 21.4 million shares or a 12.54% stake.

The shares were sold by Giapxin Sdn Bhd, the private vehicle of Tatt Giap chairman Datuk Steven Siah Kok Poay and his brother Siah Lee Beng. As at Jan 17, Giapxin was no longer a substantial shareholder of Tatt Giap.

According to Bloomberg data, Ooi is now the second largest shareholder of Tatt Giap, after the Hong Kong-based Arich Holdings Inc (13.89%). It is not known who controls Arich.

So, what is Ooi’s plan for Tatt Giap? Could he be looking to diversify its business to include property development? On April 28 last year, Datuk Thomas Liang Chee Fong, who is understood to be a close associate of Ooi, was appointed an executive director of Tatt Giap. Then in September, Liang was redesignated as a non-executive director.

According to Tatt Giap’s 2017 annual report, Liang has been involved in corporate restructuring and the rejuvenation of various business entities.

In its comments on its prospects in its 2QFY2018 report, Tatt Giap notes that though the steel industry has improved from the previous years, business is still “tough and challenging”.

“These challenges include the clearing of legacy inventories, high finance costs and shortage of working capital fund[s],” it says, adding that its board will continue to undertake asset and business rationalisation by reviewing the group’s existing business and to identify assets for disposal in order to enhance and strengthen its financial performance.

“Some of the proposal[s] under consideration are capital reduction to reduce the accumulated losses of the group; venturing into property development by developing its existing land; and fundraising,” the report says.

Tatt Giap’s 2017 annual report shows that the group has property, plant and equipment with a net book value of RM123.17 million. Of this, land and buildings accounted for RM98.9 million.

The company’s 12.6-acre factory in Seberang Perai had a market value of RM55 million as at March 30, 2016, while its five-acre factory in Bukit Minyak was worth RM24 million.

Interestingly, Ooi’s Ideal Property projects, such as Imperial Residences, One Imperial and Fiera Vista in Sungai Ara; Tree Sparina in Bayan Lepas and 1-Sky and 1-World in Bayan Baru, to name but a few, are located on Penang island whereas Tatt Giap’s land and buildings are situated on the mainland, where Ideal Property does not have a presence.

It is unclear at this juncture whether Ooi will spearhead a potential property development for Tatt Giap — he did not respond to questions from The Edge on the matter.

However, it should be noted that restructuring the business activities of listed companies to include property development is not uncharted waters for Ooi — he did it at United Bintang Bhd. In 2013, he emerged as a substantial shareholder in the loss-making heavy machinery and spare parts trading company, and diversified its operations to include property development.

Today, United Bintang is known as Ideal United Bintang International Bhd and has Ooi in the driving seat as its executive chairman. It returned to the black in 2015 as the contribution from its machinery sales was overtaken by that from property development.

Whether Ooi can — or plans to — turn around Tatt Giap remains to be seen, but given the scarcity of land on the island, it would be interesting to see if Penang’s Condo King  brings his property projects to the mainland.