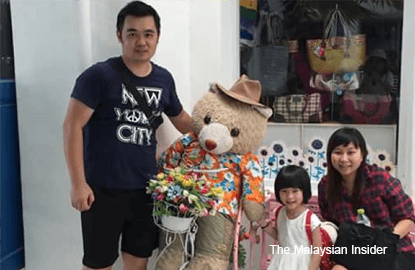 (Aug 18): A family from Penang on holiday in Bangkok has lost four members to the bomb blast at the famed Erawan Shrine in the Thai capital city yesterday.

Malaysia's Foreign Affairs Ministry has so far only confirmed the deaths of Saw Gek and Jai Jun, whose bodies are at the Police General Hospital in Bangkok for post-mortem.

Gim Seong, the family friend, told the press that Neoh, 33, was five months pregnant with her third child.

Besides her, the other surviving member of the holidaying family is her father Hock Guan, 55, while her aunt, Lim Saw See, 52, is still unaccounted for.

Gim Seong said Neoh had communicated with her younger sister Hui Sin via the WeChat messaging app about the incident after it happened.

"Yee Ling told Hui Sin that she and their father were the only ones who survived. But their father suffered minor injuries on his back and right arm. He is being treated at a nearby hospital.

"Hui Sin has taken the earliest flight to Bangkok today to see her family," the businessman told the press.

Gim Seong said the family of seven had taken the train to Bangkok and had planned to stay four days and three nights.

"They planned it at such a time because Jai Jun, who was attending university in Taiwan, was home for the holidays," he said.

Only Yee Ling's son, her eldest child; Hui Sin, another younger brother, and their elderly grandmother did not go on the trip, he said.

Gim Seong said the surviving family members were now trying to keep the terrible news from the old woman, who is 71.

"They are afraid that the old woman would not be able to take the news," he said.

The bomb, which was planted at the Erawan Shrine, one of Bangkok's most famous tourist attractions, killed about 20 people, including foreign tourists, and wounded many others.

The explosion is seen by the Thai government as an attack to destroy the economy and tourism sector.

Penang Chief Minister Lim Guan Eng condemned the attack and extended his condolences to the victims and their families.

"The situation is still unclear but it is very sad that Malaysians too were among the victims. We hope their families will remain strong.

"The state government will see what we can do to help them during this difficult time," he said.

"My thoughts and prayers are with their families," he said in a statement issued on Twitter. – The Malaysian Insider