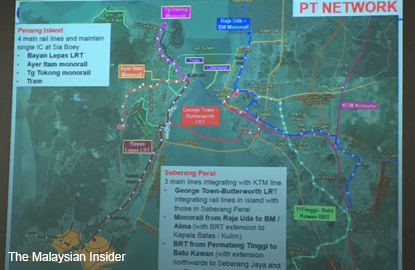 GEORGE TOWN (Dec 16): The Penang executive council today gave the green light to Penang Transport Master Plan (PTMP) project delivery partner SRS Consortium Sdn Bhd for the railway and highway schemes that include a rail line from Komtar to the airport and the Pan Island Link.

SRS tabled the plans to the state exco this morning.

The railway scheme covers both the island and mainland, with one LRT and two monorail lines on the island, one LRT line across the sea linking both sides of Penang, and a bus rapid transit (BRT) system.

Local government exco member Chow Kon Yeow said the priority for the railway scheme will be the light rail transit (LRT) line linking Komtar in the city centre of George Town and the Penang International Airport in Bayan Lepas.

This project, he said, would be Phase One of the railway scheme and treated as a priority project.

“With the green light given by the state, SRS will proceed to propose the railway scheme to SPAD (Land Public Transport Commission), which is the authority in charge of rail transport.

“SRS will consult with SPAD for its guidance and advice concerning the proposal to build a railway system in Penang,” he told a press conference in Komtar today.

He said the state has also approved the highway scheme proposed by the consortium.

The priority highway project, he said, is the Pan Island Link, which connects Gurney Drive and Bayan Lepas.

“The alignment was also presented to the exco today. The next step by SRS is to conduct the DEIA (detailed environmental impact assessment) for this proposed project," he said.

Project manager Szeto Wei Loong from SRS said the next stage after securing the state's approval is to engage the public and inform them of the alignments of the projects.

“We are going to do a preliminary detailed design for the Phase One LRT line, which will be submit to SPAD for the railway scheme approval.

“A condition for approval is giving SPAD the overall masterplan for the railway network, which the state has approved this morning.

“We will liaise with SPAD regarding this masterplan submission, and this will take another six months. Once ready, it will be up for public display.

“At the same time, we will also be submitting the DEIA for the LRT line. We hope by the third quarter of next year all the railway scheme will be approved,” he said.

For the Pan Island Link, Szeto said SRS will submit the DEIA, which will take another six months for studies to be conducted and completed, to the Department of Environment for approval.

Chief Minister Lim Guan Eng said the state have not approved any land reclamation yet or other components of the PTMP, such as water taxis and cable cars.

SRS has proposed to reclaim two or three islands in the south of Penang island to finance the RM27 billion masterplan.

The manmade islands would be auctioned off to pay for the transport projects in the masterplan, if all federal approvals are obtained.