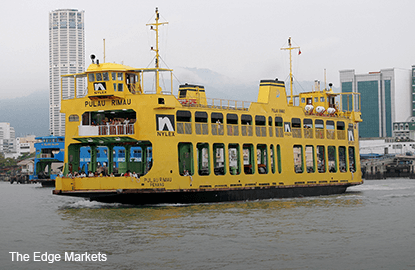 The meeting, to be chaired by the ministry’s deputy secretary-general (policy) Datuk Ruhaizah Mohamed Rashid, will be attended by Penang State Secretary Datuk Seri Farizan Darus, he added.

A number of attempts to revive the loss-making ferry service had been made as far back as 2006, when terminal operator Penang Port Sdn Bhd (PPSB) was reported as saying then that it was in talks with the Penang government to revamp its loss-making ferry service. Discussions had included halving the number of large passenger-and-car ferries currently in its fleet; and replacing them with faster, smaller passenger-only ferries.

In June 2009, the state government had also asked the Penang Island Municipal Council (now known as Penang Island City Council) to take over the ferry operations from PPSB, but nothing came out of it.

“I hope a favourable decision will be made from the meeting. I am willing to meet with Transport Minister Datuk Seri Liow Tiong Lai officially, to discuss taking over the ferry service. We are willing to accept the challenge,” he told a news conference today.

Under the proposal, the state will maintain the assets related to the ferry service and improve the facilities, as well as assure on keeping all non-management staff currently employed. However, it will not assume the ferry operations’ accrued liabilities.

“We also want to take control of the berthing docks on Pangkalan Raja Tun Uda on the island and Pangkalan Sultan Abdul Halim in Butterworth,” Lim said, adding that the retainment of the top management will be reviewed on a case-by-case basis.

The state also requested for 30 water taxi licences from the ministry, as part of the four conditions.

“We can definitely turn around the current RM20 million (annual) losses (the ferry service make), but we need to increase the number of ferries. If we operate with just four ferries per day, it would (continue to) suffer losses," said Lim.

“Hence, the need for water taxis. The ministry must approve the licence for 30 water taxis, so that we can raise the number of ferries and trips,” he added.

On Dec 2 last year, PPSB had announced its plan to reduce the ferry service from four vessels a day to three, beginning Jan 1, due to declining vehicular traffic. However, it has since postponed the plan.

"When they (Transport Ministry) are serious, we will (get) serious. We are only testing the waters now,” the official said.

He said there is "nothing on the table" at the moment to discuss the funding of the takeover bid, prior to the ministry’s approval to the state’s proposal.

“Of course, if the ministry agrees to our proposal, we will look at all options, including calling for request for proposals and tenders,” the official added.