Of past and present 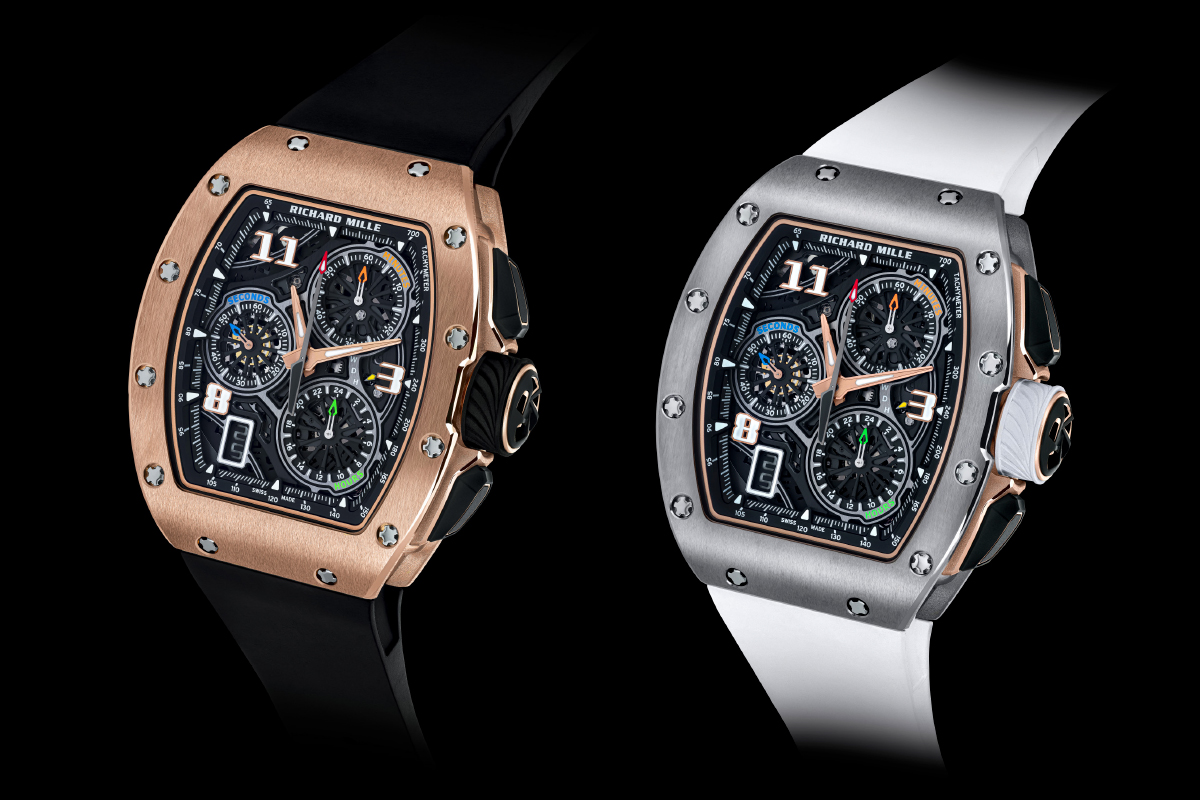 Fast cars, powerful athletes, mighty machines — these are the universes in which watchmaker Richard Mille operates, creating complex and complicated timepieces that defy convention. His obsession with movement continues with the new RM 72-01 Lifestyle In-House Chronograph, but with counters for 60 minutes and 24 hours, this watch heralds a more contemplative, slow-paced approach to the passing of time.

The latest “face” of Richard Mille — the ultimate metronome of emotion — is a work in which technicity serves and drives elegance. It is also an in-house creation, featuring the first flyback chronograph entirely developed and designed by the brand. The new RM 72-01 keeps time at three beats to a measure, a rhythm emphasising three numbers: three, eight and 11, which are the positions of the three chronograph counters. The hands dance in stylised harmony within their three respective timescales (blue for seconds, orange for minutes, green for hours), orchestrated by a six-column wheel.

This chronograph stands out for its ability to measure extended periods of time, which is rather unusual. “The minute counter at 2 o’clock goes up to 60 minutes so the user need not look at the hour hand to check if they are in the first or second half of the hour,” explains Salvador Arbona, Richard Mille’s technical director for movements. “The 24-hour counter is at 5 o’clock. I specifically mention this 24-hour counter because timekeeping periods are generally short. This flyback chronograph can cover up to a whole day.”

Designing a chronograph involves a long period of development, an exercise particularly suited to Richard Mille’s technical, ergonomic and stylistic approach. This one in particular took 30 months of full-time work. “We started with an automatic in-house calibre with barrel, going train and regulator,” Arbona adds. “From there, we developed an entire chronograph mechanism with flyback capacity, one of the project’s fundamental characteristics.” This chronograph differs from traditional versions as the hours, minutes and seconds have all been decoupled from each other — normally, each counter feeds the other. The chronograph’s torque is also separated from the minute and hour display, which is a first in watchmaking.

In this system, the torque is held constant, in contrast to a traditional chronograph where the seconds wheel feeds into the minutes wheel every 60 seconds by meshing the gears, creating a jolt in the movement. Here, the seconds and minutes are each driven by their own oscillating pinion. When the chronograph is activated, the column wheel rotates, the clutch shaft pivots and the oscillating pinions engage with their respective wheel trains, thereby launching the measurement of time. Torque transfer is kept to a minimum and remains constant for as long as the chronograph continues to run.

Richard Mille filed a patent for this clutch-system chronograph. “This little pinion that goes in or out of the teeth has been doubled,” Arbona says. “There is one for minutes and another for seconds. The system is less bulky compared to a vertical coupling, which is difficult to fit in the middle of the movement.” The CRMC1 calibre remains relatively slim at only 6.05mm thick, despite its 425 components.

For the wearer, its visual appeal in no way distracts from the comfort of using the in-house Calibre CRMC1 with its automatic winding movement and a power reserve lasting 50 hours, whether or not the chronograph is running. The two pushers require the exact same force to activate the various functions — start, stop and return to zero, while in flyback mode or not.

The exact pressure required has been determined so that the engagement of the mechanism is distinct, yet gentle. The shape and surface of the pushers, along with the “click” sound that is clear and unambiguous to the finger and ears alike, help create a feeling of comfort, seamlessness and mastery of time. When the crown — in 5N gold and black TZP ceramic — is pulled, the function indicator offers a choice of winding (W), date adjustment (D) and time setting (H). Each one plays its part in a watch designed for everyday wear, as reflected in the date window display in a vertical position at 7 o’clock. Fully imagined, manufactured and assembled at the brand’s Les Breuleux facilities, the Calibre CRMC1 can be seen through the openwork caseback

The visual appeal of this watch is undeniable, from the arresting layout of the dial to the luxe materials used. The RM 72-01 is available in four versions — 5N gold, titanium and white or black ceramic — and channels the very quintessence of Richard Mille watches. This highly architectural model is a distillation of mechanics and handcrafted finishing, combining exacting standards and inventiveness, with the ultimate in precision.

On the precipice of space and time

Inspired by the delicate dance staged by the RM 72-10 Lifestyle ­In-House Chronograph’s three counters, Richard Mille commissioned a contemporary dance piece that would paint a visual picture of the micro-mechanics that bring this timepiece to life. Within, choreographed by the world-famous Benjamin Millepied and set to music by composer Thomas Roussel, was filmed in the harsh and arid Joshua Tree desert in California, and features two dancers responding to one another, unleashing their natural vitality via an unstructured and organic pas de deux.

There were few other talents whom Mille could have tapped for such a project. Like him, Millepied and Roussel create works imbued with the power of imagination, and are obsessed with perfection. In the tradition of great jewellers, their determination to achieve perfect balance and harmony in movement acts as a guide in their creative process. They are prepared to repeat the same movement a hundred times every day to produce the perfect version.

“I fully appreciate the ascetic craftsmanship of Richard Mille’s work. I, too, like to think of myself and my dancers as craftsmen,” says Millepied, creator of the ballets for the film Black Swan, and former head of the Paris Opera, as well as founder of the L.A. Dance Project.

And, like Richard Mille, Roussel and Millepied use the latest technology in their creations, deploying technicity to transcend their discipline. In ballet and orchestral music respectively, Millepied and Roussel draw on heritage and tradition to bring their art to life in modern ways.

This sublime environment proved inspirational for Roussel. “Because Within drew on space/time, I was drawn to it immediately. I created music where time dilates and duplicates itself, to fit the production. Inspiration is born of emotion,” he says.

Starting from a sample of the watch’s stopwatch function, the composer then injected a tempo, a musical rhythm that matches the raw, unbridled energy of the dancers. Roussel weaves a repetitive and mysterious primordial music, the percussion keeping beat as though counting seconds. His composition was performed by the 50 musicians of the prestigious London Symphony Orchestra at the St Luke’s Church recording studio.