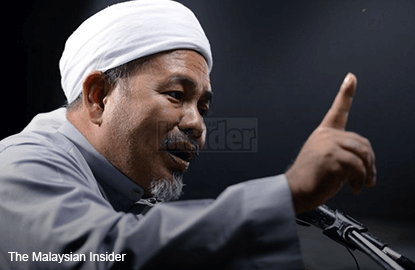 "If there is a no-confidence vote moved against the prime minister, PAS will join in as the actions by 1Malaysia Development Bhd (1MDB) and answers on the RM2.6 billion donation clearly cannot be accepted by the people," he said.

The stand of the two Islamist party leaders appeared to contradict the statement by PAS president Datuk Seri Abdul Hadi Awang, who last month ordered the party's MPs not to support such a motion.

This is not the first time that conflicting statements came from the party chief and his deputy.

Tuan Ibrahim's recent statement that PAS will support the Bersih 4.0 rally also appeared to contradict Hadi's, who had instead said that the Islamist party will only send three representatives to the rally.

Last month, Hadi reminded his MPs not to support any motion at the Dewan Rakyat for Najib to step down.

He had reasoned that they had to comply with the directive if they did not want action taken against them as PAS would only want to bring about change in a healthy manner, and not through any political means that could cause chaos in the country.

Najib then praised Hadi's stand for holding on the principle of innocent until prove guilty.

Hadi had also urged PAS lawmakers to first observe the newly-installed Cabinet before a no-confidence motion is tabled against Najib in the Dewan Rakyat.

Why has the police suddenly become slow in taking action? Is that not hypocrisy? – Datuk Tuan Ibrahim Tuan Man

In his statement today, Tuan Ibrahim also questioned why the Inspector-General of Police Tan Sri Khalid Abu Bakar had yet to investigate the Barisan Nasional MPs and the "mystery old man" who were alleged to be part of a plot to topple the government under Section 124B of the Penal Code for activities detrimental to parliamentary democracy.

"Why is there no order to bar these people from leaving the country as what was done to a few opposition MPs and also NGO leaders?

"Why has there been no arrests and homes raided as what was done to officers from SPRM  and Bank Negara?

"Why has the police suddenly become slow in taking action?

"Is that not hypocrisy?" the deputy president questioned after moves by the authorities to bar certain people who had criticised the alleged mismanagement of 1MDB from leaving the country.

He added that given that the police has yet to act on the latest issues, he hoped that they would not now move against the organisers of Bersih 4 under Section 124B as it would only tarnish the enforcers' image in the eyes of the people.

Tuan Ibrahim said that police should have instead arrested BN ministers who were trying to cheat the people.

He added that PAS would be discussing these issues in detail in their upcoming People's Congress on September 12. – The Malaysian Insider