Pas and Umno at it again 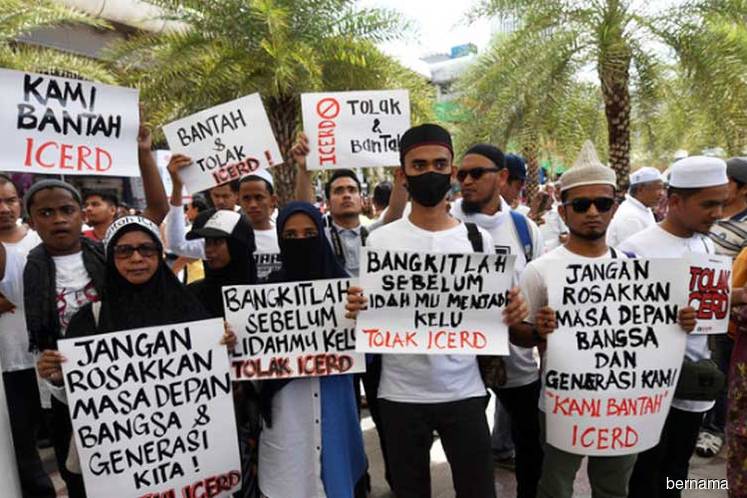 They are using UN human rights conventions again as an excuse, hoping to gain political mileage

I hate to say it lest I be accused of blowing my own trumpet, but I knew it all along. Umno and Pas have no intention to let the ICERD issue rest.

That’s the International Convention on the Elimination of All Forms of Racial Discrimination, which the Prime Minister’s Office (PMO) said last Friday the government will not ratify.

They need another big issue to exploit — now that the ICERD controversy has been snuffed out by the government.

And Pas believes it has found the answer, again using United Nations human rights conventions — five actually, that they hope to gain mileage from. Whether the issue can be as big as ICERD remains to be seen.

The party information chief Nasruddin Hassan is quoted by Malaysiakini as saying: “They (the government) don’t want to ratify ICERD so the question I’m raising is what of the five other conventions? Are they not a threat to the country?”

Among the five treaties are the international convention against torture and the covenant on civil and political rights.

To Nasruddin the five treaties have major risks and says: “I don’t want it to be manipulated and they (the government) will proceed to ratify it”.

As example he cited Suhakam’s statement in September slamming the caning of two women who were sentenced by the Syariah court in Terengganu. Suhakam saw the punishment as going against one of the UN conventions. As Nasruddin sees it, “With that they are pushing to abolish all related laws so it can match international standards”.

So the strategy albeit not new, is as clear as daylight. Pas (and expect Umno also) will whip up Malay/Muslim sentiments and put the Pakatan Harapan government in a spot. That is, it will be accused of being against so-called Islamic laws and subservient to the non-Malays. At the same time, it risks facing the wrath of non-Muslims for not living up to the aspirations of a new Malaysia and kowtowing to Malay/Muslim extremists. Just like what was done during the ICERD controversy.

When the government decided not to ratify ICERD, I thought it would not be wrong for me to assume Umno and Pas would have loved for the issue to be prolonged.

I could not help but wonder whether both were feeling down as the government’s decision had deprived Pas and Umno of a sensational and explosive issue which both parties had milked to their favour, gaining some ground and scoring political points among the Malay/Muslim community.

It looked like Umno and Pas did not want it to end. How else do you explain remarks and statements made after the decision not to ratify ICERD was announced? Like Datuk Seri Ahmad Zahid Hamidi saying “a mere statement from the PMO would not suffice”.

The Umno president had insisted the decision be put on record in parliament.

The anti-ICERD gathering on Dec 8 was to go on as planned albeit to celebrate the announcement and for thanksgiving, prompting someone to react on Facebook that  “thanksgiving should be done in mosques not Dataran Merdeka”, the site of the gathering.

So the statement by Nasruddin that other UN conventions hold major risks is proof enough of ICERD round 2.

To be realistic the ICERD issue has sadly not gone away even though Pas has found another cause to champion.

The people who are unhappy with the decision not to ratify the convention are still unhappy and there are quite a number of them.

Never mind that “not ratifying” and “reject” could have different meanings. The thing is people who said they voted for a new Malaysia or rather middle Malaysia are disappointed.

Take a look at comments in social media and you can feel the anger and disappointment. Remarks like: We missed a golden opportunity to build a better Malaysia and Harapan bowed to extremism.

There are some telling the prime minister “[Tun Dr] Mahathir [Mohamad] you blinked” going on to ask “why did he suggest the idea of ratifying ICERD at the UN general assembly in September when he has little volition in doing so?”.

Even civil society groups and activists supportive of Pakatan all this while have slammed the administration for what they call the “embarrassing U-turn on ICERD”.

But was it a U-turn? Dr Mahathir, in the words of opposition MP Khairy Jamaluddin “made the commitment to ratify ICERD during the UN general assembly and not some kampong ceramah”.

Well in a way he did. Dr Mahathir told the assembly that the new Malaysia will firmly espouse the principles promoted by the UN in its international engagement and this included the principles of truth, human rights, responsibility and accountability as well as sustainability.

Based on media reports the prime minister said: “It is within this context that the new government of Malaysia has pledged to ratify all remaining core UN instruments related to the protection of human rights”.

Now that is the detractors, critics and political foes are holding on to those words to pin the blame on the prime minister, conveniently discarding what he said subsequently.

This was to tell the UN assembly that “however this will not be easy as Malaysia is multi-ethnic, multireligious, multicultural and multilingual”. Hence said Dr Mahathir “we will accord space and time for all to deliberate and to decide freely based on democracy”.

Somehow that space to deliberate was clearly utilised by Umno, Pas and their allies in some Malay/Muslim NGOs for political mileage. Perhaps to remain relevant perhaps as a distraction of sorts from some issues and problems they are facing. Take your pick.

But rest assured it is about politics disguised under Islam and bangsa Melayu. I’ve said that before and I am saying it now.

There are also many Malaysians who are appreciative of the government’s decision not to ratify ICERD.

No, I am not talking about veteran politician Lim Kit Siang who said the decision was to avoid another May 13 tragedy.

I am referring to the average Malaysians. They, too, have taken to social media and the comments section of news portals to say among other things “it is the right decision for now as ratifying ICERD will play into the hands of Umno and Pas”.

Now we have to deal with the latest Pas-Umno “intiative”.