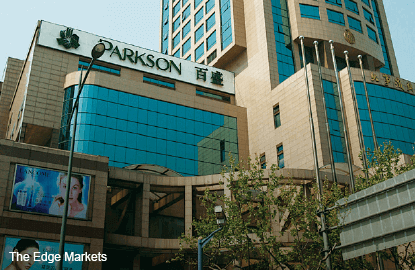 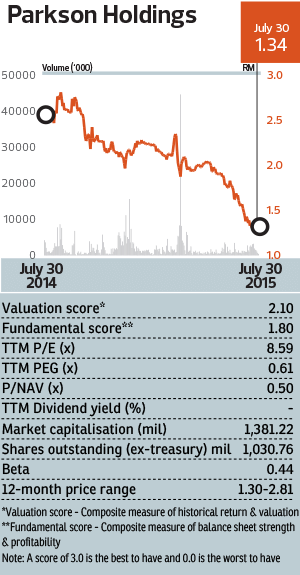 PARKSON Holdings Bhd surprised investors and analysts when it announced on July 15 that it would be undertaking an internal reorganisation of its group structure that would see its 67.6% Singapore-listed Parkson Retail Asia (PRA) moved to its 52.7% Hong Kong-listed Parkson Retail Group Ltd (PRGL).

However, the news did not seem to lift investor sentiment as Parkson Holdings’ share price had fallen 2.26% to RM1.30 by July 21, three trading days after the announcement. The retail group’s share price has been on a downward trend over the last year, falling 47.13% to RM1.33, from RM2.52.

Market observers can’t put their finger on why the group decided on the reorganisation. “I don’t know how this is going to make a difference,” says one.

Kenanga Research says in a report that it is neutral on the reorganisation.

PRA has 67 Parkson department stores under its subsidiaries in Southeast Asia, namely in Malaysia, Vietnam, Indonesia and Myanmar. It also has a presence in Sri Lanka through its stake in leading fashion lifestyle retailer Odel PLC.

While Parkson Holdings is not cashstrapped, having about RM1 billion net cash as at March 31, 2015, the reorganisation would nevertheless generate proceeds of RM641 million as the company disposes of its entire stake in PRA to PRGL.

Parkson Holdings says in its Bursa Malaysia announcement that it plans to use the proceeds for business expansion, new investment opportunities and working capital purposes. But it has yet to identify potential investments, the company says in an email reply to digitalEdge Weekly.

“The company is in the process of identifying potential investment opportunities in related retail businesses, including shopping malls, branding and food and beverage, in the region. The group will consider investments in retail and related complementary businesses and not investments outside these sectors,” it adds.

The decline in Parkson Holdings’ share price could be due to the lack of near-term catalysts.

The group, which derives a large portion of its revenue from its outlets in China, has faced setbacks recently due to the country’s challenging retail environment that has adversely impacted earnings.

Retail sentiment in Malaysia has also been weak due to the rising cost of living, but its seems to have improved a little based on the segment profits for the third quarter ended Sept 30, 2015, which gained 27.5% to RM31.79 million compared with a year earlier.

The company’s operations in China, however, continue to languish as segment profits fell 37.5% to RM66.36 million during the same period.

Group-wise, net profit for the third quarter ended Sept 30 fell significantly to RM2.96 million from RM55.04 million a year ago due to a one-off provision for an arbitral award in respect of disputes arising from the Beijing Metro City Shopping Plaza’s tenancy agreement.

For the cumulative nine months ended March 31, China contributed 57.1% to the group’s operating profit, followed by 47.4% from Malaysia. Myanmar, Vietnam and Indonesia were loss-making.

The group has been trying to revamp itself to face the challenges in the retail landscape. It launched an online shopping platform to keep up with trends and is morphing into a lifestyle concept retail business.

“We think the operating headwinds are still significant. O2O (the online shopping platform) is still in a nascent stage. Growth could be limited as customers would still need to collect merchandise from the department stores after placing orders online. Management’s initiatives to include F&B offerings in its stores and possibly open new stores in shopping malls are positive moves, but it may take years for corresponding impact on earnings to materialise,” TA Securities says in a July 10 report.

“Coupled with the intense competition from online shopping and oversupply of retail space, we believe it would take a longer-than-expected period of time for Parkson to reverse its SSSG’s (same store sales growth) declining trend given that these stores have reached maturity,” it says.

Parkson stores in China have been experiencing negative SSSG in recent times although the contraction eased significantly to 3% in the third quarter, compared with 7.5% in the second quarter.

Post-reorganisation, Parkson Holdings will likely see a decline in its earnings contribution as it has already reduced its stake in PRA.

Kenanga Research downgraded its target price for Parkson Holdings to RM1.43 from RM1.72 previously, a discount of 35% because of the tough operating environment in China. It, however, maintained its “market perform” rating. 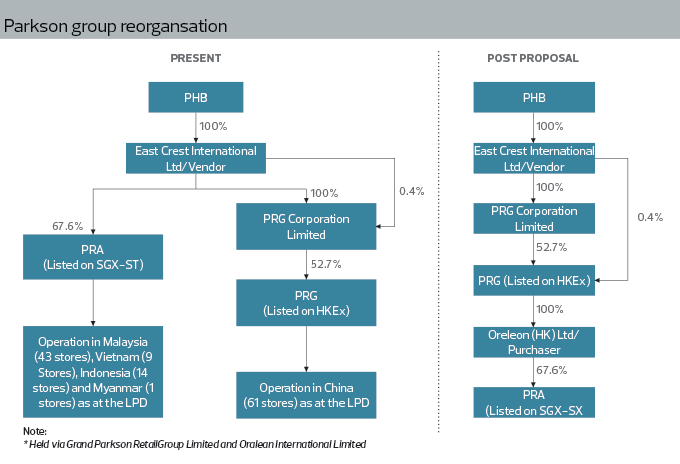