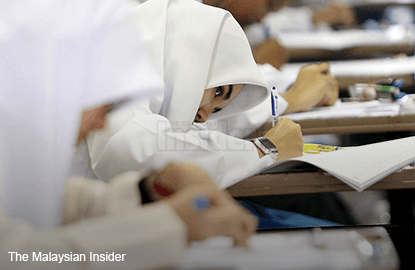 Parent Action Group for Education (Page) and the Association of Parent Groups in Reforming Education (Aspires) are also concerned that the decision was politically motivated at the expense of educational excellence.

"While we do understand the need for teachers, students and the relevant stakeholders to prepare, we are concerned that the delay is again a subordination of educational excellence to political motivations," said Page chair Datin Noor Azimah Abdul Rahim.

"Is there a definite timeline set when English will be a must pass subject? Or will it be delayed until after the next general election?"

Shamsuddin Hamid, the founder of Aspires, said his first reaction to the news was "codswallop".

"That was my first reaction... that it is utter nonsense. I cannot help but be cynical about this. Because of the political climate, they have to preserve their support, like what will happen to the Malay students?

"The problem is that the powers-that-be think we are all dumb. They have been putting the teachers in practice for years, so what other preparation do they need? That only proves the fact that this is all a political ploy," he told The Malaysian Insider.

In a statement yesterday, the Education Ministry said the decision to postpone the compulsory pass in English was to enable teachers, students, as well as other related parties, more time to get prepared.

Bukit Bendera MP Zairil Khir Johari said that the decision was yet another example of arbitrary decision-making in the education system.

"It shows how our education policies are constantly decided upon in an arbitrary manner without considering important issues such as readiness of the system, capacity of teachers and students to adopt and adapt to changes, as well as the state of the existing infrastructure," the DAP lawmaker said.

Citing the examples of the Teaching and Learning of Science and Mathematics in English (PPSMI) and the School-Based Assessment (SBA), he said they only showed that not much thought was put into these policies before they are implemented.

"In the past, we have seen how hastily introduced policies, such as the PPSMI, had to be reversed when it was found to be counter-productive because teachers could not teach well in English.

"Similarly, the controversial SBA was also revamped and had most of its major elements removed after three years of botched implementation.

"Clearly, not much thought is put into policies before they are carried out," he added.

Page, which has long advocated for PPSMI to be reintroduced in schools, questioned if the reason for the postponement was so that the pass marks in SPM could be brought down to ensure more candidates could pass.

"Or is it to ensure the infrastructure and teachers are sufficiently equipped and trained to raise the standard of English taught in our schools and reach high world standards?" asked Azimah.

Expressing her disappointment, she said the students who "desperately" need proficiency in English to secure a better future would be the ones to lose with such a move.

"This is unfortunate for students who desperately need the English proficiency for their future. It is also unfortunate that the goal post has been moved. The targets in the blueprint should be adhered to.

"Wave 2 is planned to embark on various programmes and initiatives to compliment existing ones and we hope these will be rolled out immediately for impact and effect. Where there are obstacles and hindrances in the way, confront them head on and let us move on," she said.

Zairil, who is DAP's parliamentary spokesman for education, science and technology, noted that Putrajaya had spent more than RM1 billion to improve the standard of the language in school in recent times.

"The postponement is an admission that the government has failed to improve English standards despite spending more than RM1 billion in the last few years to do so," he added.

The proposal to have compulsory pass in English in SPM was made in 2013 by then education minister Tan Sri Muhyiddin Yassin.

The ministry also announced that the Science Practical Examinations for Physics (Code 4531), Chemistry (Code 4541), Biology (Code 4551) and Additional Science (Code 4561), scheduled for implementation for SPM next year, had also been postponed.

"The postponement is aimed at ensuring school facilities and laboratory equipment nationwide meet the standards set before the examination is carried out.

"The education ministry hopes all related parties have been informed of the postponement," said the statement.

In 2012, Muhyiddin announced that the proposal would also introduce a Centralised Practical Science Examination in SPM as one of the 15 recommendations to increase the number of science stream students in schools.