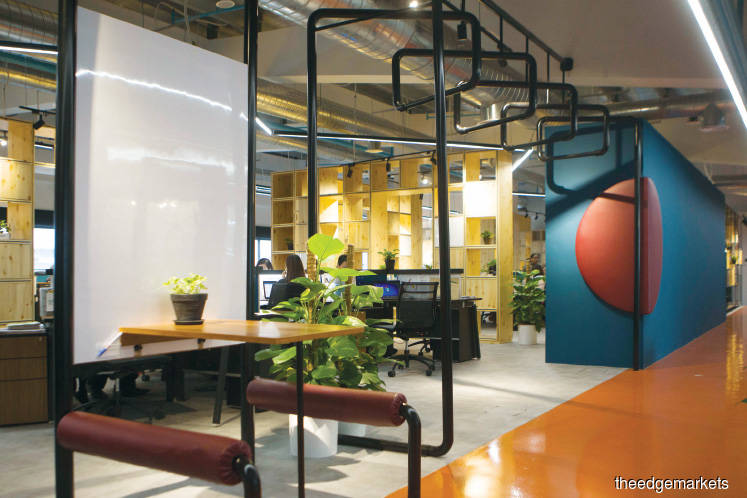 Coworking is a growing trend in Malaysia with spaces used for this purpose run by both international and local brands, including WeWork and Common Ground.

Of the four, the workspace in Sekitar26 Enterprise — a component of Sekitar26 by Paramount Property Development Sdn Bhd — is the latest. Meanwhile, the group plans to extend the space in Starling Mall by 15,000 sq ft in the near future.

In July, the developer moved its headquarters from Kota Kemuning to Co-labs Coworking in Sekitar26, taking up 15,000 sq ft of the total 35,000 sq ft.

“I think we are the first property developer to make this move … not only the first developer but also the first company of this size to move into a coworking space,” says Beh Chun Chong, CEO of Paramount Property.

Its new headquarters has a sports concept, which is in line with the “Happy Healthy You” campaign that the developer started last year, he adds. City & Country was recently given a tour of the office, which is tucked away in a private section within the coworking space.

Other than promoting good health, the concept is meant to remind the group’s staff of the importance of teamwork and hard work, explains Beh. “The key to succeeding in sport is teamwork and training hard enough.”

According to him, one of the reasons the developer decided to relocate was to future-proof itself. “The current workforce [in the country] is made up of more millennials. This (coworking) is the trend seen around the world … the new office style. So, we decided to take this bold step to move our business to the next level.”

Co-labs Coworking has an open concept and this helps to shorten the business and decision-making processes. Flattening a company’s hierarchy would also help speed up these processes. “It is our group CEO Jeffrey Chew’s intention to collapse the levels to a minimum of four. Everyone would be able to give us their opinions and feedback, and if they have any ideas, they would be able to share them with us,” says Beh.

Another reason he cites for the relocation is the flexibility of being able to work in other spaces run by Co-labs Coworking, which has a passport system and affords its members access to its other workspaces.

“One of the issues we had in the past was that our property headquarters in Kota Kemuning was quite far from our group headquarters in Petaling Jaya or even from the offices of some of our consultants, which are in Kuala Lumpur. Logistics-wise, it was a waste of time to travel around to meet people. By moving into a co­working space, we have the flexibility to multiply our office and presence. I call it ‘flexi-venue’,” Beh points out.

“This is also to future-proof our business and to make our business processes more efficient and competitive. Moving into this coworking space was the catalyst — it forced us to expedite digitisation, and by being here, everyone can feel the vibe and the benefits,” remarks Beh.

Two months in and he says he can see more interaction and energy among the staff now that everyone is in the same space. “Previously, we occupied a 5-storey building. So each department was on a different level. The first change I have noticed is that I see my colleagues from the other departments more often now as before this, I seldom went to the other levels.”

Launched in 2013, Sekitar26 Business is fully sold and was handed over two years ago. It has an occupancy rate of 70% to 80% and its tenants include event organisers, logistics companies, vending machine operators and various businesses that use their spaces as show units.

Phase 2, named Sekitar26 Enterprise, was launched in 2017. It comprises 48 units of stratified 2-storey shopoffices, 26 shops and 12 offices. The shops are for leasing only while the other components are open for sale.

Paramount Property began handing over the units at the end of last month. There are still a few that are available for purchase.

The remaining 11.63 acres of Sekitar26 has been set aside for the final phase but Beh says there are no solid plans for the area yet. “We want to make sure the second phase is fully occupied before we submit the approval for Phase 3,” he explains, adding that the parcel has a commercial title.

The developer plans to make Sekitar26 a property industry hub by encouraging industry players such as the Master Builders Association Malaysia to hold their talks there.

Beh says Paramount Property intends to approach the Malaysian Institute of Architects or various architecture and interior design firms, especially young designers, to invite them to set up their offices in Co-labs Coworking.