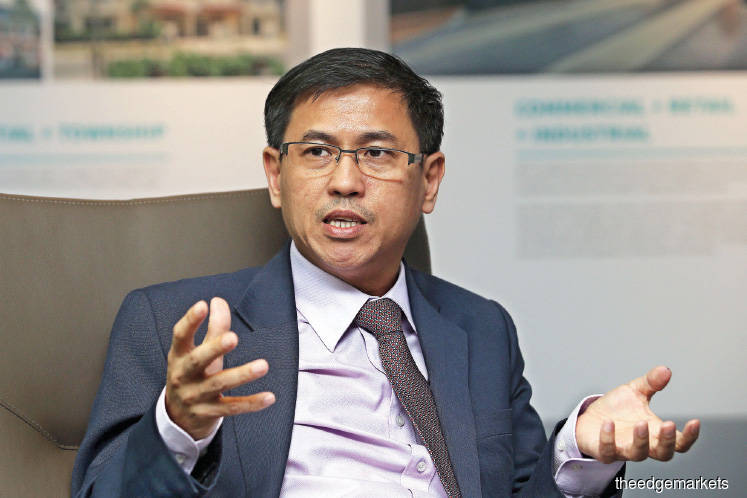 KUALA LUMPUR: Paramount Corp Bhd has maintained its property sales target at RM1 billion for the financial year ending Dec 31, 2020 (FY20), which it says will be driven by some RM1.2 billion worth of launches planned for the year.

Demand will come from the growth of new households and buyers who are looking to upgrade their homes, said Paramount group chief executive officer Jeffrey Chew (pic) at a media briefing yesterday on the group’s results for FY19.

Citing a report from the National Property Information Centre, Chew said households in Malaysia are estimated to grow 2.9% annually from 2011 to 2020, which means there will be some 7.4 million households needing 200,000 homes during this period.

Furthermore, Chew said there are buyers who are now starting to buy after holding back on their purchases in the last three years.

In FY19, the group sold some RM692 million worth of properties, below its RM1 billion target then, due to “weak demand for its commercial properties”, said Chew. As at Dec 31, 2019, the group had unbilled property sales of about RM913 million, he said.

As for the group’s launches this year, they include landed residential properties in Bukit Banyan, Sungai Petani, Sejati Lakeside, Cyberjaya and Greenwoods in Salak Tinggi as well as high-rise residential projects like Utropolis Batu Kawan, Penang and Berkeley Uptown, Klang and Kemuning Utama, Shah Alam.

Pricing for the upcoming launches will be in the range of RM450 to RM500 per sq ft, said Chew, or per unit prices of about RM400,000 to RM600,000. The group said demand for homes at such price points remains high.

But margin-wise, there may be further compression as property prices have not grown while the room for further cost-cutting is limited, said Chew.

“We have tried many things to reduce costs for property development, all of these have helped reduce our costs. Even so, our [profit before tax] margins still came down, from 20%-21% [in 2015], to 18% currently. Our margin is dropping about 1% per annum.

“In the past, property prices grew. They grew at about 3%-4% per year between 2008 and 2009, that is why margins can either be maintained or go up. But, property prices have been flat in the last five years, so sometimes [margins] come down,” Chew added.

In view of the persistently challenging property market, Chew said the group is looking at areas to spur growth.

These include venturing into property management services and diversifying its portfolio overseas. It is currently looking at Thailand, Vietnam, and the Philippines for its overseas venture. It is targeting a 10% revenue contribution from overseas projects in the next five years.

Paramount shares closed four sen or 2.86% lower at RM1.36 yesterday, bringing a market capitalisation of RM825.09 million, after some 2.3 million shares were traded.