Pandikar says he wanted to resign 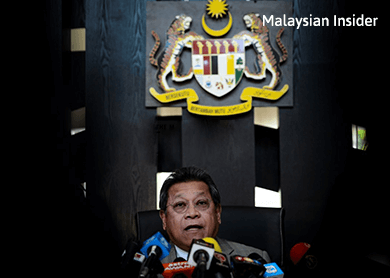 KUALA LUMPUR: Among the grouses Dewan Rakyat Speaker Tan Sri Pandikar Amin Mulia had in wanting to resign was the perception that the Malaysian Parliament was seen as a rubber stamp for decisions by the executive.

The Speaker of the lower house, in explaining yesterday the retraction of his resignation letter, said he had told Prime Minister Datuk Seri Najib Razak that he wanted reforms to be implemented so that the Parliament and the Speaker’s office would no longer appear as if they only acted on the orders of the government. “It is not true that I tendered my resignation because I was unhappy with the toilets or furniture in the Parliament building,” he said with reference to statements on the matter by Barisan Nasional Backbenchers Club chairman Tan Sri Shahrir Abdul Samad and former prime minister Tun Dr Mahathir Mohamad.

“I tendered [resignation] based on my desire to restore dignity to the Parliament and make it a first-class Parliament on par with other parliaments in the world,” he said in a press conference at his official residence in Kuala Lumpur yesterday.

Pandikar Amin said he wanted the select committee system instituted, in addition to the five existing standing committees. Select committees, as practised in other parliaments, would enable better scrutiny and debates of new bills, he said. He also wanted the Parliament building to be upgraded to have infrastructure and facilities that were on par with the government buildings in Putrajaya and with the Palace of Justice.

Pandikar Amin said Najib had listened to these proposals and asked for time to fulfil them, as these matters had to be approved by the Cabinet. He said Najib subsequently informed him that the Cabinet meeting on April 10 had discussed some of these matters and agreed that Deputy Prime Minister Tan Sri Muhyiddin Yassin would oversee the implementation of some of these changes.

Pandikar Amin said yesterday that such reforms had been on his agenda since the last general election in 2013. He also said he wanted to uphold the concept of separation of powers between the legislative and the executive branches of government. “This is my seventh year as Speaker. If there are no changes as what I have proposed, I won’t hesitate to write again to the prime minister of my resignation. If what I have suggested is not implemented by the executive in the remainder of this Parliament term, I will resubmit by resignation.

“There is no need for others to announce that the Speaker has resigned. If the prime minister won’t accept my resignation, I myself can announce it,” he said.

Pandikar Amin explained his intended resignation and subsequent retraction yesterday after being forced to deny it when Dr Mahathir announced it over the weekend.

The Speaker said he had met Najib, who did not want to read his resignation letter, but had listened to his grouses instead and told him to stay on. — The Malaysian Insider