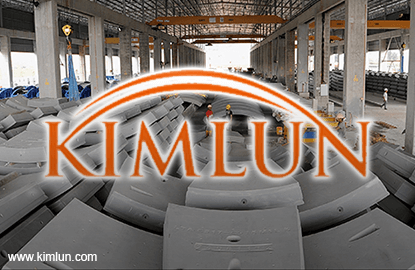 Kimlun Corp Bhd
(March 11, RM1.71)
Maintain buy with a lower fair value of RM2.10: Kimlun Corp Bhd announced yesterday that it secured a RM1.46 billion Pan Borneo Highway job with its partner Zecon Bhd. The contract was awarded to a soon-to-be-incorporated joint venture (JV) company, and comprises development and upgrading of the Pan Borneo Highway from the Serian Roundabout to Pantu Junction. 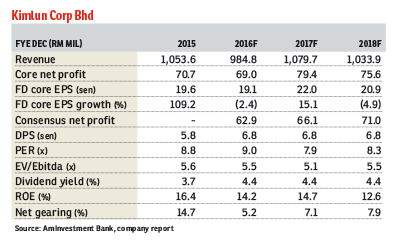 The duration of the contract is 48 months, with estimated completion in end-March 2020. Kimlun’s wholly-owned subsidiary, Kimlun Sdn Bhd, will hold a 30% stake in the JV company, while Zecon will hold the majority 70%.

This is the first major job announced by Kimlun this year. Together with RM273 million won earlier this year, Kimlun has secured RM711 million worth of new jobs. This has surpassed our order book replenishment of RM650 million. As such, we have scaled up our construction order book target to RM900 million for financial year 2016 forecast (FY16F). Our manufacturing order book replenishment target of RM250 million is maintained.

As for its manufacturing arm, it is targeting to supply products to Klang Valley Mass Rapid Transit Project 2, as well as the Eastern Region Line, Thomson Line and Deep Tunnel Sewerage System in Singapore. Currently, its Senawang (600,000 tonnes per annum) and Ulu Choh plants (300,000 tonnes per annum) are at 30% and 80% utilisation rates respectively.

All in, we have tweaked up our order book target for FY16, but reduced our profit before tax margin assumption to 8% (versus 10% earlier) and recognition assumptions given that a few of its projects will only achieve strong billing recognition next year. Note that a majority of its outstanding order book was secured in the second half of 2015. We maintain “buy”. It is currently trading at nine times price-earnings ratio. — AmInvestment Bank Bhd, March 11