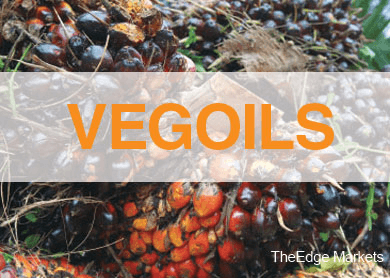 JAKARTA (Aug 28): Malaysian palm oil futures extended gains into a second session on Friday, tracking other commodity markets while a weaker ringgit also helped, but were set to post their ninth straight weekly loss after a global market rout earlier this week.

By the midday break, the benchmark palm oil contract for November on the Bursa Malaysia Derivatives exchange had gained 1.9% to 1,962 ringgit ($466.03) a tonne, following a 3% gain in the previous session.

"Market is going for further retracement after an oversold palm," said a trader in Kuala Lumpur. "In the external market, soy oil, crude oil, and palm oil in Dalian are up sharply, our market is following."

The palm benchmark hit its lowest since March 2009 on Tuesday, and has lost 3.1% so far this week.

Wang Tao, a Reuters market analyst for commodities and energy technicals, said palm oil may rise more to 2,024 ringgit per tonne, following the completion of a five-wave cycle. The cycle started at the July 3 high of 2,285 ringgit. A Fibonacci retracement analysis reveals palm oil has climbed above a resistance at 1,963 ringgit, the 23.6% level.

A weaker Malaysian ringgit also helped the commodity as it makes palm cheaper for offshore buyers. The ringgit has been emerging Asia's worst performing currency, losing nearly 17% so far this year, on weakness in global currencies and domestic politic woes.

In comparative vegetable oils, the US September soyoil contract was 1.1% higher in early Asian trade, while the most active soybean oil contract on the Dalian Commodity Exchange jumped 2.1%.

Crude oil futures rose, adding to their biggest one-day rally in over six years the day before, led by recovering equity markets and news of diminished crude supplies.