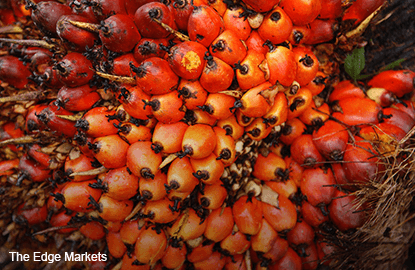 KUALA LUMPUR (Feb 22): Malaysian palm oil futures rose on Wednesday to bounce of a more than three-month low in the afternoon session as bargain hunters shrugged off market expectations of higher supplies and weak demand.

Benchmark palm oil futures for May on the Bursa Malaysia Derivatives Exchange gained 0.9% to RM2,809 (US$631) a tonne by the end of the session. The contract had earlier fallen to RM2,763, its weakest level since Nov 7.

Traded volumes stood at 97,813 lots of 25 tonnes each on Wednesday evening.

"The market is up mainly on bargain-buying after the sharp drop yesterday," said a futures trader based in Kuala Lumpur, who had earlier expected prices to drop in the second half of trade as the market still has concerns over rising production.

"Perhaps the market selloff has cooled now, with traders squaring off positions after the heavy selldown," he said later in the evening.

Traders are expecting to see a recovery in output for the full month of February, as the effects of a crop damaging El Nino wear off.

In related vegetable oils, soybean oil on the Chicago Board of Trade rose 0.9%, while the soybean oil contract on the Dalian Commodity Exchange fell 0.5%.

The May contract for palm olein on China's Dalian Commodity Exchange declined 0.5%.