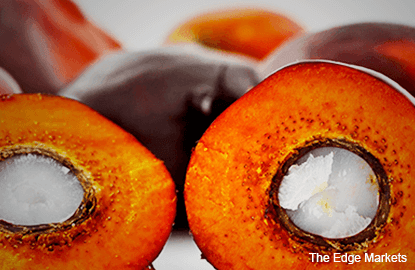 "Fundamentally production is inching up but exports are uncertain," said a Kuala Lumpur-based futures trader.

"The trading band in the short term should be RM2,800–RM3,000," he said, however, adding that it is too early to determine whether this is the start of a price-declining phase.

In the recent weeks, palm oil prices have reached their highest in more than four years as market supplies are tight on low production levels.

Palm's fresh fruit yields are still suffering the effects of a crop-damaging El Nino, but is expected to recover by the second-half of the year and weighing on benchmark prices, according to leading industry analysts.

A rise in export demand could support prices, but demand in the first-half of February declined from the corresponding period last month, showed cargo surveyor data.

Palm oil is expected to seek a support at RM2,879 per tonne, and then either hover above this level or bounce towards a resistance at RM2,959, said Wang Tao, a Reuters market analyst for commodities and energy technicals.

The May contract for Dalian palm olein fell as much as 2.7%.