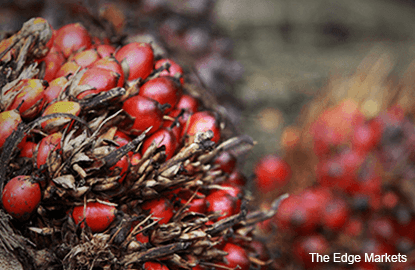 KUALA LUMPUR (Jan 5): Some of the palm oil counters rose today, following a rebound in the local bourse, as well as on  a report said that palm oil inventories are expected to fall 6% in December.

CIMB Research analyst Ivy Ng said the performance of palm oil counters today was partly a rebound from yesterday’s weak performance and generally, people are more optimistic about the stock market this year.

“Yesterday, the market was down. Most of the counters were sold down. Today, I think most of them were recovering from yesterday’s sell down,” she told theedgemarkets.com via telephone.

Meanwhile, in a note dated Jan 4, Ng said Malaysia’s palm oil inventories estimated to have fallen 6% month-on-month (m-o-m) to a three-month low of 2.75 million as at end of December.

Based on findings from a survey of 22 Malaysian planters by the CIMB Futures team, Malaysian crude palm oil output (CPO) fell 18.9% to 1.34 million tonnes in December. Palm oil exports fell 5.7% m-o-m, according to export statistics released by cargo surveyors.

“We project that 2016 will be a better year for planters, as we expect CPO prices to increase by 14% to average RM2,450 per tonne, driven by lower palm oil supplies (due to on-going El Nino) and higher biodiesel mandates in Indonesia and Malaysia,” she wrote.

However, Ng said this will be partly offset by rising labour costs.

“We project the near-term CPO price to trade in the range of RM2,100-2,500 per tonne, due to the relatively high soybean stockpiles and weak demand.

“We maintain a neutral sector rating, as the higher prices will be partially offset by lower output and rising costs,” she added.