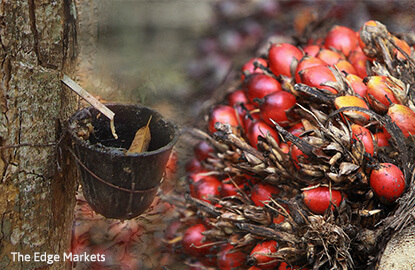 However, the market is seen trading range-bound as output for March could be weaker than expected, traders said.

Benchmark palm oil futures for June delivery on the Bursa Malaysia Derivatives Exchange were down 0.3% at RM2,772 (US$626.16) a tonne at the midday break.

Traded volumes stood at 20,085 lots of 25 tonnes each at the midday break on Tuesday.

"The market has both positive and negative factors keeping it in range, and uncertain on which way to break out," said a futures trader in Kuala Lumpur, referring to the stronger ringgit as an additional factor for the market's decline.

A stronger ringgit, palm's traded currency, usually makes the tropical oil more expensive for foreign-currency holders. The ringgit has gained 0.5% against the dollar since last week.

Palm oil remains neutral in a range of RM2,767-2,810 per tonne, said Wang Tao, a Reuters market analyst for commodities and energy technicals.

Palm also tracks the movement of other related vegetable oils, as they compete for a share in the global edible oils market.

Soybean oil on the Chicago Board of Trade slid 0.2%, while the September soybean oil contract on the Dalian Commodity Exchange fell 0.6%.

The September contract for palm olein on the Dalian Commodity Exchange dropped 0.5%.