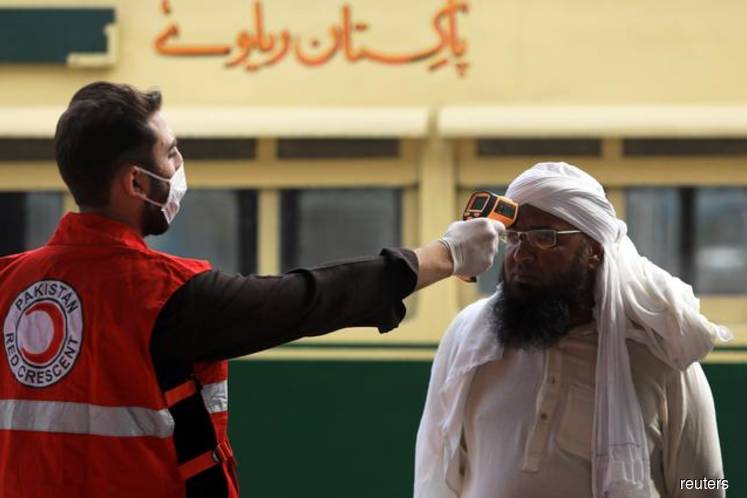 ISLAMABAD/COLOMBO (March 18): Pakistan's prime minister called for calm after its tally of coronavirus cases rose to 256, while Sri Lanka sealed itself off and declared a partial curfew on Wednesday, as South Asian countries tried to stem the epidemic.

The total number of confirmed coronavirus cases in the Indian subcontinent topped 500 on Wednesday.

Officials imposed travel restrictions to block the spread of the disease amid fears that inadequate health facilities could be overwhelmed in a region that is home to nearly 1.9 billion people.

Pakistani Prime Minister Imran Khan, in an address to the nation, urged citizens to remain calm and not rush to get tested.

"Only those with intense symptoms should go to hospital," he said. "There is no need to worry. We will fight this as a nation. And God-willing, we will win this war."

His comments came amid a growing dispute in Pakistan between federal and provincial authorities, with the latter struggling to secure sufficient coronavirus testing kits and blaming the federal government for failing to properly test and quarantine hundreds of Pakistanis who recently returned home across a land border with Iran.

Pakistan said on Tuesday it would require all arriving air passengers to show they had tested negative for the disease. Land borders have already been shut.

Sri Lanka, which has recorded 51 coronavirus cases, said it would ban all incoming flights for two weeks from Wednesday to combat the spread of the virus.

Sri Lanka said its stock market would remain shut for the rest of the week as it attempts to minimize interactions and curb the disease. The Sri Lankan rupee on Wednesday dipped to an all-time low of 187.23 against the U.S. dollar.

The country has imposed a curfew in certain areas in a bid to control the spread, police said.

In India, where 147 cases of the coronavirus have been confirmed, authorities on Tuesday canceled nearly two dozen long distance train services in a bid to curb the disease and also because of a fall in passenger numbers.

India also said a total of 276 Indians have tested positive for coronavirus overseas to date, and 255 of them are currently in Iran.

Officials in the western state of Maharashtra proposed plans to decongest prisons by granting bail for minor offences.

The Bombay Archdiocese, which is home to more than 500,000 Roman Catholics, also issued a notice exempting people from the obligation to attend Sunday mass for two weeks.

Bangladesh confirmed its first fatality from the disease on Wednesday, while its total tally of confirmed cases rose to 14.

Prices of essential commodities have gone up as coronavirus fears sparked panic buying in Bangladesh.

"We've 25% to 30% more in stock compared to the same period last year. There is no need for panic buying," Bangladesh's Commerce Minister Tipu Munshi said on Wednesday.

Nepal said it was closing cinemas, stadiums, gyms, museums, swimming pools and dance bars until April 30. Schools and universities will be shut.

Passengers transiting through Europe, the Middle East, Iran, Malaysia, South Korea and Japan will not be allowed to enter Nepal until April 15, Nepal's government said in a statement.

Nepal has also banned gatherings of more than 25 people in temples, monasteries, churches, mosques and other public places.