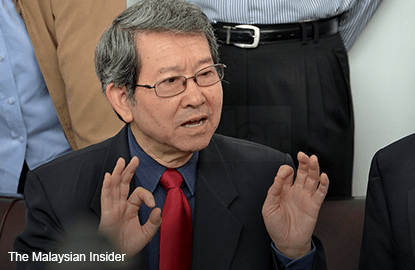 (Oct 28): Parliament's Public Accounts Committee (PAC) deputy chairman Dr Tan Seng Giaw is in the dark about the bipartisan panel meeting which is expected to take place next Monday.

"I read it in the media and social media. Actually this has not been discussed with us, we did not get any notice.

"We don't know anything for the time being," he told reporters outside the Parliament lobby today.

The meeting was announced by newly appointed PAC chairman Datuk Hasan Arifin yesterday, but he refused to divulge the agenda of the first meeting.

Tan said he has so far only spoken to Hasan informally.

“The only thing I said to him was that once you’re appointed as a PAC member, you no longer represent any party but you represent Parliament.

“When you represent Parliament, things should be done in the fairest manner. We do not care what the issue is because the truth has to come out, no matter if it’s 1MDB,” Tan said in reference to the state-owned investment firm that the committee was investigating.

“No one, including all PAC members, should be a hindrance to the truth.”

Hasan, the Rompin MP, was appointed the new chairman after the post was vacated by Datuk Nur Jazlan Mohamed, who was appointed deputy home minister in a July Cabinet reshuffle.

Four other Barisan Nasional lawmakers from the previous committee also joined the Cabinet.

All vacancies were all replaced with new appointments that were finalised on Monday, with one of the seats filled by PAS.

PAC had been in the midst of probing into alleged irregularities in 1MDB when the Cabinet reshuffle took place.

Kota Baru MP Datuk Takiyuddin Hassan was also appointed as a new PAS representative in the bipartisan committee, which will resume sitting with 14 members. – The Malaysian Insider