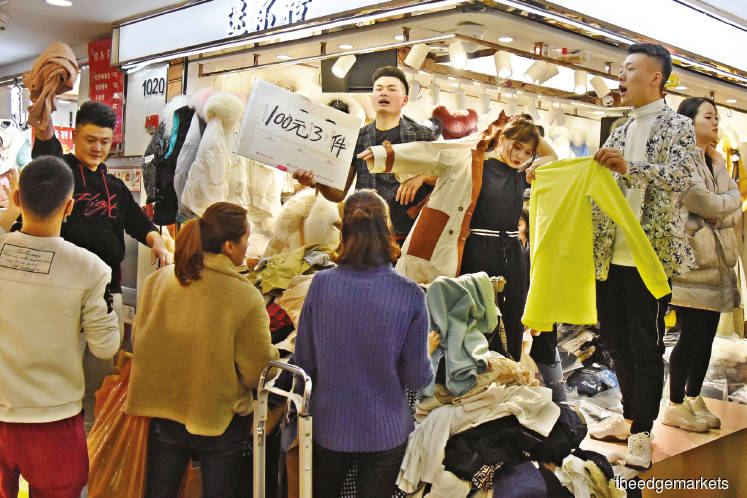 Chinese shoppers at a wholesale market in Hangzhou ... China is moving towards a consumption-based economy and wants consumption to make up about 60% of its GDP by 2030 Concerns about weaker corporate earnings and a wider economic slowdown have continued to beset financial markets, making it harder for investors to achieve their desired returns. Exacerbating the situation are the trade tensions between the US and China, which have led to many rushing for cover or waiting to see where the pieces fall.

At this juncture, United Overseas Bank Ltd (UOB) is advising clients to be overweight on fixed-income instruments, particularly those in China, according to Francis Tan, an investment strategist at UOB Private Banking in Singapore.

“We are uncertain about the outcome of the trade talks [between the US and China], but we are quite certain that the central banks will remain accommodative, at least until 2020. And because of that, by leveraging the low interest rate environment and putting investments into a safer risk-return environment — which is fixed income — investors can get a total annualised return that is similar to what they would normally get from equities,” he says.

“[By using leverage,] one can find bonds that provide a return that is similar to those offered by equities, and at lower volatility. As a simple comparison, the year-to-date total returns of the MSCI USA Index [with dividends reinvested] is 20.6% and for US corporate bonds, it is 13.2%. Our strategy has been to use leverage to get a higher return from bonds.”

The MSCI USA Index measures the performance of more than 600 large and mid-cap companies in the US.

Tan says UOB fund managers have been overweight on fixed income since the beginning of the year in an attempt to seek shelter from the unpredictability in financial markets, which often go haywire after US President Donald Trump’s remarks and tweets.

“The volatility is not worth advising our clients to increase their position in equities. No one will be able to sleep at night otherwise,” he adds.

“The markets are quite risk-off [at the moment], so much so that investors are ready to pounce at any sign of optimism. I think that is scary. That is a trading mentality and we are not recommending our clients to do that. We are not telling our clients that the trade talks are going well. We are still protecting them,” says Tan.

Whatever the outcome of the ongoing US-China trade discussions, the bank’s investment unit is taking a defensive approach, he adds. “There is no point going long on equities based on the belief or anticipation that the trade talks will turn out well. Time and time again, this sentiment has proved to be fruitless.”

Tan says in recommending a balanced-risk portfolio to clients, the equity portion is 45%. But it has been underweight to about 38% in the last couple of months.

“We want to help clients preserve their wealth. If they have a balanced risk profile, we still recommend equities, but reduce the allocation to about 38%. It takes time to implement this. Our managers need them to sell their holdings and get cash back to redeploy into other asset classes such as bonds,” he adds.

But UOB is not taking their bets off equities totally. “We do not want to miss out on the good days in case we are wrong. There has been an uptick in the Caixin China General Manufacturing PMI (Purchasing Managers’ Index) while the rest of the world is going deep into contractionary mode. So, we are quite positive on China,” says Tan.

“China is slowing down, but at what rate? At this size, it is still hitting a growth of 6.2%. It is actually growing very fast, which is not too bad.

“People fear that Chinese corporations have a lot of debt. But that is not too big of an issue right now because the smaller, high-yield types and investment-grade Chinese firms are still safe.”

He adds that the Chinese foreign reserves, at US$3.1 trillion, are the strongest in the world. “China is trying to buy time with the US. While [the negotiators] talk, the Chinese [officials] are doing a lot of work behind the scenes. They are massively restructuring their entire economy, be it outsourcing — by moving out production that is of low value and not contributing to a lot of productivity — to Third World economies.”

At the same time, China is moving towards a consumption-based economy. “It wants consumption to make up about 60% of its GDP by 2030, and it is on track right now,” says Tan.

“That is why we are still comfortable with Chinese investments. It is the next five years that matters. For our strategic asset allocation, we are recommending China bonds, preferably its state-owned and investment-grade ones,” he says.

In the meantime, the bank has been monitoring how the other emerging markets have benefited from the ongoing US-China trade tiff. “Even before Trump became president, Asean was benefiting from China’s diversification. The Chinese government was already restructuring its economy around 2011/12 and stimulating the economy. They realised long ago that they cannot rely on an export or investment-led model. They already wanted to go down the path of consumption,” says Tan.

“China is reducing [the number of] its secondary industries and improving its services sector. Its manufacturing sector is being channelled out to various countries, particularly those in Asean and Africa and India. The restructuring of the entire Chinese supply chain did not start purely because of Trump, but he has helped to accelerate that.”

Being an Asean-centric financial institution, UOB has been facilitating foreign direct investment in the region and it is “stronger than ever, thanks to Trump”, he says. Likewise, many US companies are moving their manufacturing and production facilities out of China and into Southeast Asia.

“The US firms are here in a big way and so are Chinese firms. Vietnam is benefiting from the trade surplus with the US right now,” says Tan.

He allays concerns about a global recession happening in the coming year amid a persistent trade war. The main reason for this view is the US Federal Reserve’s decision to pause its interest rate hikes and even lower its policy rate.

“Singapore is a very good example because we are straddling really close to the 0% [GDP growth] mark. Malaysia is far from the mark. China is slowing down, but still far from the 0% mark.

“But we are not taking this too literally. I am going to stand on the side of Deputy Prime Minister Heng Swee Keat, who said two months ago that Singapore would face a technical recession but it would still be a full-year positive. Even if we are down one quarter, we still have the rest of the year to record a growth of 0% to 1%.”

Tan points out that central banks in Asia still have a lot of room to manoeuvre in terms of interest rates. “At the end of the day, the domestic economy matters. But for the majority of Asean countries like Malaysia and Singapore, whose key exporting partner is China, we need to keep a close watch on China’s central bank policy rather than our own,” he adds.

There are also opportunities in developing economies such as Argentina, says Tan. “Those with extra cash can look at its sovereign bonds.”

Argentine bonds may be an exception as the political situation and government restructuring have been enticing investors.

“In the past, the country was mismanaged. But this has been priced in in the form of a haircut to sovereign bonds. The downside is limited,” he says, adding that this is not the bank’s house call.

Tan reiterates that the bank is only optimistic about emerging market equities in Asia as the region’s PMI numbers are the only ones in the expansionary zone across these markets. “I would not say it is the single factor guiding us in our allocation to equities. But that is also one of the stronger indicators. We are not trading in and out on a high-frequency basis. That is definitely not good for our customers,” he says.

As for Europe, Tan says its fund managers believe that companies in the region will continue to underperform. He points out that the PMI data is not encouraging as manufacturing sentiment in the eurozone fell in September to the worst level in nearly seven years.

Germany, which is the largest European economy, contributes a big part to the region’s economic performance, but its manufacturing PMI fell to 41.4 in September, the worst reading in more than a decade.

“German car exports are down. So, the key economic sentiments such as business and consumer sentiments, are all trending lower. The fact that sentiments are trending lower means that the PMI number has more legs to go down. That is why we are underweight on the region,” says Tan.

Again, he stresses that being underweight on the eurozone does not mean staying away from investing in the region. “European financials are doing pretty well. We are still recommending contingent convertible bonds (CoCos), which are debt instruments issued by European financial institutions. These instruments are providing good yield and yield is important now because we are in a low-interest-rate environment and central banks only have one direction to go, which is to hold or cut interest rates,” he says.